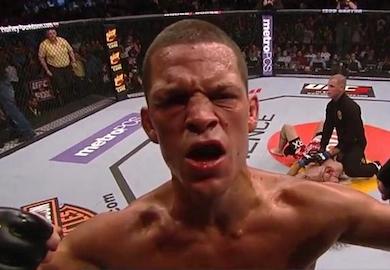 Nate Diaz will return to the octagon this December!

UFC officials announced today that the Stockton slugger will square off with perennial contender Rafael Dos Anjos in the co-main event of UFC on FOX 13.

Nate Diaz (17-9 MMA, 12-7 UFC) will fight for the first time since November of 2013, where he scored a first-round TKO victory over former title challenger Gray “The Bully” Maynard. That win snapped a 2-fight losing skid for Diaz, as he had previously lost bouts to Josh Thomson and Benson Henderson respectively.

Meanwhile, Rafael Dos Anjos (22-7 MMA, 11-5 UFC) is coming off the biggest win of his UFC career, this after scoring a knockout victory over former lightweight champion Benson Henderson at August’s UFC Fight Night event in Oklahoma. Dos Anjos has now won 7 of his past 8 octagon bouts, with his lone loss in that time coming to Khabib Nurmagomedov via decision.

UFC on FOX 13 goes down December 13 live from the U.S. Airways Center in Phoenix, Arizona. The event is headlined by a heavyweight fight featuring former champ Junior dos Santos taking on the hard hitting Stipe Miocic.

Who do you have winning this key lightweight battle? Sound off Penn Nation!