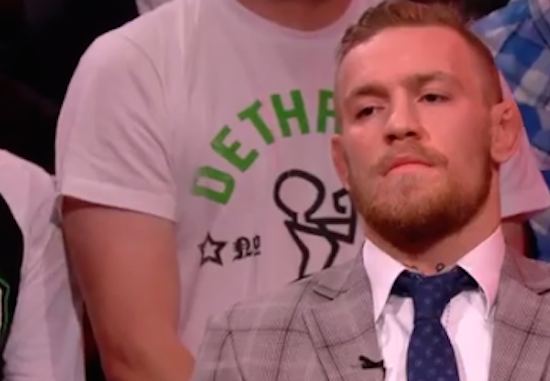 Conor McGregor may not be fighting on the UFC 179 card tomorrow, but that doesn’t mean ‘Notorious’ has kept his name out of the headlines.

McGregor did a Q&A with a hostile Brazilian crowd AT THE UFC 179 weigh-ins, where ‘Notorious’ was met with chants of death threats. To which he responded:

“The next time Jose Aldo steps into the octagon, it will be against me. In the meantime, I took a fight against Dennis Siver to eliminate another contender. Simple as that.

“No Brazilian will have a world title after I am done.”

“Talk is cheap. He has not knocked out or submitted anybody in the last five years. How is he going to touch me. It is fact. I speak truth, not trash.”

However the most intense moment of the press conference came not when McGregor was being threatened by a stadium full of people screaming death threats in Portuguese, but rather when he shouted back at the fans in Portuguese “Jose Aldo, you will die”.