Matt Brown Training With Ben Askren In Prep For Lawler, Says He May Start Fighting Like GSP 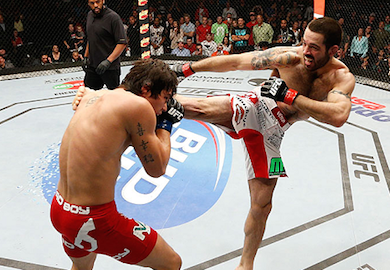 “He’s one of the best in the world at what he does. It’s going to help me with all the small little details that are always forgotten. A lot of people do MMA wrestling so to speak, but you miss a lot when you try to limit your wrestling. Doing pure wrestling with high level guys is what makes you get better. My striking gets better when I wrestle, my jiu-jitsu gets better when I wrestle, I think in a couple of years you might see me start fighting like GSP. I like wrestling.

In a recent interview with FOX Sport’s Damon Martin, Matt Brown discussed the benefits of Training With Ben Askren and his love of wrestling.

Brown faces Robbie Lawler at UFC on FOX 12 next month.