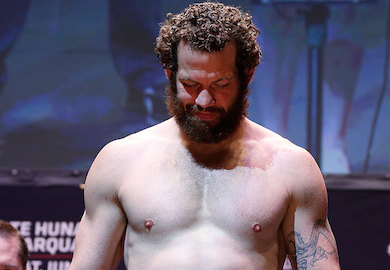 Fresh off his win over James Te Huna last month, Nate Marquardt spoke with MMAKanvas to discuss the UFC’s recent ban on TRT as well as the increased random drug testing that saw Chael Sonnen and Wanderlei Silva in quite a bit of trouble with the NSAC.

“I think (the TRT ban is) great because it’s just got to be fair, and that’s probably the best way to do it, because guys are going to bend the rules. I think now what really needs to be focused on is the testing”

“Even at the fights, there’s things that (can) slip in, like when I took my urine test (post fight), the guy was in the room with me but he didn’t make me take my pants off. I’ve talked to guys from the Olympic Training Center and when they take a urine test, you have to take your pants all the way off and that ensures that you’re not hiding anything and the guy has to watch you”

“And not only that, they follow you around and make sure you aren’t doing anything, like putting something in your bladder or whatever, and then, like I said, they make you drop your drawers all the way down – that’s not being done yet. I think that really needs to be done, otherwise people will find ways to get around it.”

Despite the room for improvement, Marquardt does think the UFC an NSAC made a step forward with random out of competition testing.

“You can see that there are ways to catch guys. When you show up at their gym or doorstep unannounced, that’s how you’re going to catch somebody,” he said, “I think the tighter the testing gets, it’s going to be better for everyone.”