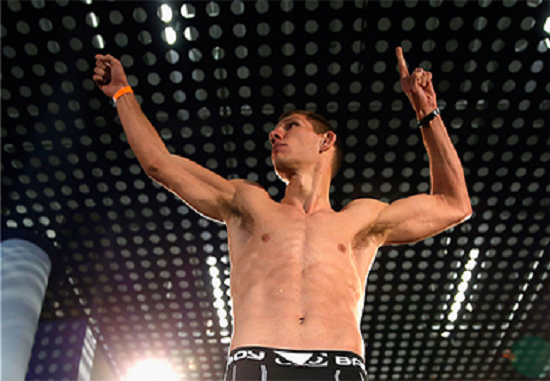 Luke Barnatt is currently gearing up for his UFC Fight Night 57 bout against Roger Navaraez this Saturday in Austin Texas.

Leading up to the bout, Barnatt has been training at Alliance MMA, and living on a yacht along with teammate Kelvin Gastellum.

Barnatt, who has gone 3-1 after the Ultimate Fighter, will be looking to start another win streak this Saturday after suffering his first loss in his professional career at the hands of Sean Strickland in May.

He spoke to MMAJunkie to discuss his upcoming bout:

“I feel like I’m an undefeated guy going into this fight, and I know fans feel that, too. I don’t really care what the stats say; it’s just how I feel.”

“I think I’m fighting one of the lesser opponents I’ve fought since joining ‘The Ultimate Fighter,’ I think Roger is very lucky to be here in the UFC, did what he’s supposed to do, and fought Patrick Cummins as a late replacement. The UFC were desperate to find somebody in that fight. Now, he’s dropping down to middleweight, which is where he should be fighting, and they’ve given him me.”

“To me, that looks like they’re putting him up for an execution. It doesn’t look they want the guy to do very well in his hometown.”

“I think he’s going to be very desperate on the feet, and then I’m just going to catch him with a right hand. I’m too sharp and too crisp for this guy, but I think my right hand, it will connect. And when it connects, it’s devastating.”

“I’m looking for a knockout early on, first-round, get out of there, don’t get any bumps, enjoy Christmas, and then look to fight in the new year.”

This article appeared first on BJPENN.COM
Previous articleLeslie Smith update on injured ear: “My days as an ear model are over”
Next articleKogan: UFC needs entertainment not tennis
© Newspaper WordPress Theme by TagDiv