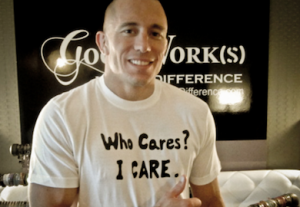 “I came out publicly about the performance enhancing drugs. I didn’t do that to shoot the UFC or attack an individual. I believe if you attack an individual, twenty other will come. I didn’t want to attack the UFC, I’ve always been the guy that want to defend the sport, but it’s a new sport and I believe they should do the guideline and there should be more testing because it’s a big problem. And I’m glad they ban the TRT because that was a big problem but they still have a lot of other things to do because it’s a big problem in the sport. I didn’t do that to blame the UFC. I did that to change the system. It’s the system I want to attack, not the organization or the individual. It’s the system of the sport itself. The UFC is the organization, it’s not the sport.

I believe what they should do is make it a random test. Especially for title fight or for any fight. Random test for carbon isotope. it’s one of the newer tests they should think about doing. Putting a plan or something to take care of the problem.”

In a recent interview with the Brazilian Media, former UFC welterweight champion, Georges St-Pierre, discussed the never-ending topic of PED’s in MMA.