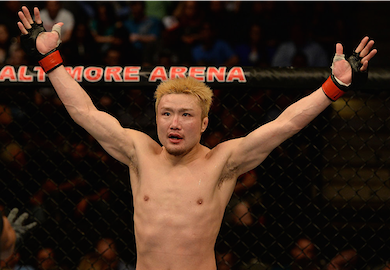 “Probably my next fight will be the one in Japan in September. I’ll grab a glass of beer once and then get back to training camp. Every day I’m thinking about retirement, but I know there’s going to be fun out there waiting for me to fight, so I’m still fighting. If I get a title shot, I will quit drinking.”

During his UFC 172 post-fight media scrum, Takanori Gomi, confessed that he would give up drinking for a shot at UFC gold.

Last weekend, ‘The Fireball Kid’ returned to MMA action with a ‘Fight of the Night’ winning victory over Isaac Vallie-Flagg.

The win won’t push him up as a contender, but the former Japanese superstar has his sights set on a return to Japan later this year.