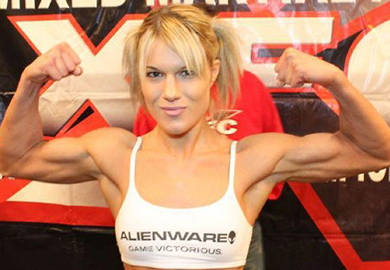 The Ultimate Fighter Season 20 hasn’t even aired yet, and already, like no other cast before, the housemates are making headlines.

During the media rounds in New York, popular female fighter Felice Herrig accused the ladies of bullying her, which lead to this:

I hear the other @UltimateFighter 20 women in NY are bullying @feliceherrig . Grow THE F UP!! #GrowUp #Jealous

@CarlaEsparza1 @UltimateFighter @feliceherrig thanks for vouching for me! they're really being assholes to her, so much for anti bullying

@AngieOverkill @CarlaEsparza1 what are you talking about Angela. Please tell me how we are bullying her. #WhatAjoke

@heatherjoclark @CarlaEsparza1 that shit that Lisa and jojo pulled on the red carpet was uncalled for, IMHO

@AngieOverkill @CarlaEsparza1 no idea what ur talking about. But u claimed we were doing it all week.

@AngieOverkill @heatherjoclark @CarlaEsparza1 I was the 1 called a Bitch so not sure what was done to her?? Enlighten me since you know..lol

@LisaEllis115 @AngieOverkill @heatherjoclark I wasn't there, but heard from very unbiased sources that you guys were being pretty mean.

@LisaEllis115 @heatherjoclark @CarlaEsparza1 we just had a 2 hour bus ride together & nobody said anything. Social media is emboldening huh?

This article appeared first on BJPENN.COM
- Advertisement -
Previous articleBrian Rogers Now Set To Face Brazilian Striker Rafael Carvalho At Bellator 125
Next articleLauzon To Chiesa: ‘Pay $50k As You Say Or Take Loss Like A Man’