Fighter of the Year Award: Who did it best? 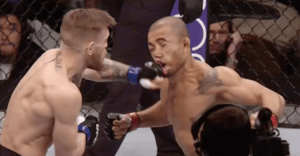 If you thought there was anyone else who did it better than “The Notorious” Conor McGregor, we’re all ears. Love him or hate him, McGregor fought three times and ended all three contests in brutal fashion.

Dennis Siver was the first of three this year who squared up against McGregor at UFC Fight Night in Boston MA earning The Notorious one performance of the night by punishing Siver via TKO in the second.

Chad Mendez at UFC 189 finally lived up to his “Money” moniker earning him half a million just to show up against McGregor, then being the recipient of a McGregor left ended the contest in the second round.

Last and certainly not least UFC 194 Jose “Scarface” Aldo vs Conor McGregor was everything the brash Irishman said it would be. 13 seconds into the first exchange McGregor shut the lights off on the most dominant featherweight in any organization with a left that ended Aldo’s reign.

With those three performances is there another fighter who achieved more in 2015? 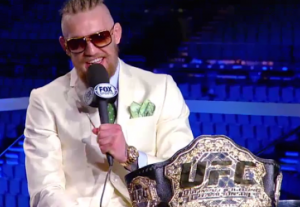