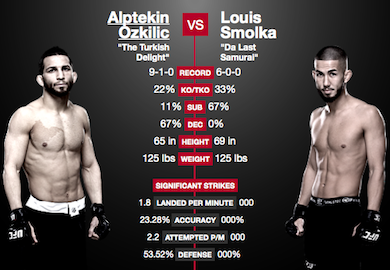 Louis Smolka made his first walk into the octagon with a record of six wins and no losses, but that means nothing when you first step in the octagon. The Hawaiian would have to prove himself in the eyes of the UFC fans, and he did just that by putting on an exciting performance.

Neither Ozkilic or Smolka shied away from throwing big bombs at the start of the bout. Punches whiffed and kicks were blocked, but it set a nice pace for the rest of the fight that the two would keep up.

Ozkilic scored a takedown a minute into the fight and he transitioned to side control with ease. Smolka would get back to his feet and land some knees to the body. Seconds later, Ozkilic was caught with a hook and he almost dropped. Keeping his composure, he sent a counterpunch that almost dropped Smolka! The crowd was brought to their feet but neither man was knocked down. Instead, they brought the fight to the ground when Smolka was taken down.

Ozkilic would transition to side control with ease but he could not keep position. Smolka would cause a scramble and get back to his feet. Still, it was superior position and in such a close round it likely rewarded Ozkilic the first.

They started the second with the same high-octane action they produced from the first. Smolka’s shots were a little bit straighter and a bit more crisp and that allowed him to get the momentum early on in the round. Ozkilic landed another takedown but he could not do anything with it. Smolka landed a ton of knees from the clinch and he did a nice job of changing levels, following up knees to the body with triple jabs to the head. Ozkilic reverted to his takedowns and that’s where the second round would end. Ozkilic had the takedowns, but Smolka outstruck him while standing.

Ozkilic shot for a takedown within seconds of the third round beginning but Smolka made his way back to his feet right away. Smolka showed that he had found his range by repeatedly connecting with jabs and glancing hooks.

Smolka’s attack in the third round was very similar to that of the Diaz brothers. He would land punches that did not have a lot of power behind them, but he landed them in high volume.

Louis Smolka would get taken down with ease, but he would get in position for submission seconds later or back to his feet. With thirty seconds left, he found himself in full mount and he poured on the strikes. The referee stood close by to make sure Ozkilic was defending himself intelligently, and we reached the end of the round.

The Hawaiian ended up winning over the fans as he won the fight by decision.