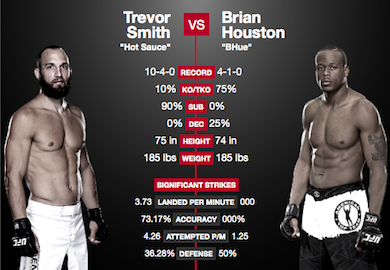 These two middleweights did a great job at neutralizing each other’s strengths in the first round. Trevor Smith avoided Brian Houston’s shots by keeping his distance and shooting for takedowns while Houston utilized his sprawl to stay off the ground.

It wasn’t until there was one minute left in the first where Houston was finally taken down. Smith transitioned multiple times and almost locked in a clock choke, but Houston defended enough to force Smith to abandon the attempt. The round ended with Smith on top landing shots.

Trevor Smith was opened up in the second with a glancing left hook from Houston. The shot itself wasn’t bad, but the leather from the glove likely aided in tearing the forehead open. Smith’s cut bled profusely and you could see it pouring onto the octagon canvas. The blood actually aided Houston in escaping some takedowns throughout the round. After repeatedly failing takedown attempts, Smith slowly got back to his feet and left his hands hanging down; he was starting to get tired.

The second half of round two favored Brian Houston as he utilized his distance to pick Smith apart with jabs and hooks. With one round a piece, the fight was likely to be decided in the third round.

The final round saw a lot of the same action from the second; Houston bouncing around the octagon while peppering Smith with shots. Smith telegraphed his shots as he let his left hand hang low while his right was cocked. He was never able to land the big shot he needed to score the knockout victory, though.

The judges awarded the victory to Trevor Smith, anyway! Houston left the octagon in protest and the crowd booed the decision. Did the judges make the right decision? Share your thoughts in the comment section below!