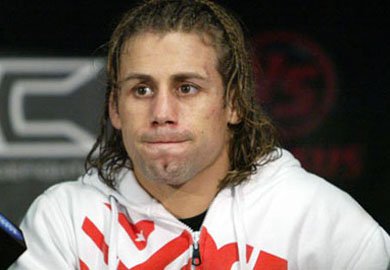 Urijah Faber (26-5) recently spoke to Inside MMA about his upcoming interim bantamweight title fight with Renan Barao (28-1, 1 NC). The two will fight in the main event of UFC 149 to determine who gets the next shot at the undisputed title when the winner goes on to face Dominick Cruz once the champ has returned to full health.

Faber describes why, in some ways, a fight with Barao is more dangerous than one with Cruz:

“I’m excited for it. I really feel like it’s a more dangerous fight. If you look at him versus Dominick, it’s not as tricky, it’s more straightforward. He has a lot of heavy artillery in his offense. He’s really polished on the ground, a black belt who has a lot of finishes. But it’s not gonna be as tricky as Cruz. With Cruz, you have to find him, he’s running around and trying to outpoint you. Barao and I are gonna go out there and beat each other up, and I’m gonna get the win.”

In terms of total fights, Barao does have the edge on Faber. Here, Faber explains why they’re are actually an extremely close match-up:

“Yeah, a lot of people don’t realize, also, that I’ve fought the majority of my career at 145 pounds, even though I’ve been the same size the whole time. Because our sport’s been developing, I didn’t have the opportunity, back in 2003, when I first started fighting to fight at these lower weight classes. But I was always at the top of the 145 pound division. I wanted to take that next chance at the title, even though I was being given a big size disadvantage. I think I have one more TKO or KO, one more submission than he does, but he has a couple more fights than I do.”

Barao is, of course, on an unreal streak of around seven years and 18 fights. Faber doesn’t see this as a large threat, however, as he believes that he has fought much better:

“I’ve definitely fought better fighters, but the guy’s got the championship mentality. There’s no doubt about that. This is gonna be his toughest test, but he’s not gonna be my toughest test.”

Faber realizes that this will be an extremely tough challenge for him but also thinks that he has an advantage over Barao in every aspect of MMA:

“I’m gonna see where the fight goes. I feel like, my stand up feels incredible. If i had to say where his strengths and mine match up, and weaknesses and stuff like that, I don’t feel like either of us are weak anywhere, but he’s got better knees and kicks than I do. I feel like I have a speed advantage and power with the hands. I think, wrestling, I’m a little bit better, and we’re comparable in jiu-jitsu.”

Faber is no stranger to tough competition and explains that even early in his career, he always wanted to fight the best:

“That’s what I’ve asked for, from the beginning. I remember my second fight ever, I asked for Charlie Valencia. He was the guy who was the man, back when I first started fighting in 2003. He was the 155 pound champion for Gladiator Challenge, and I remember the promoter saying, ‘Oh, you don’t wanna mess with Charlie Valencia.’ I hadn’t even really been training, but I said, ‘Is he the best guy? Let’s find out.’ Nine years now, at the top of whatever weight class I’m in. That’s just a testament to living a healthy lifestyle, training my butt off and getting better all the time.”