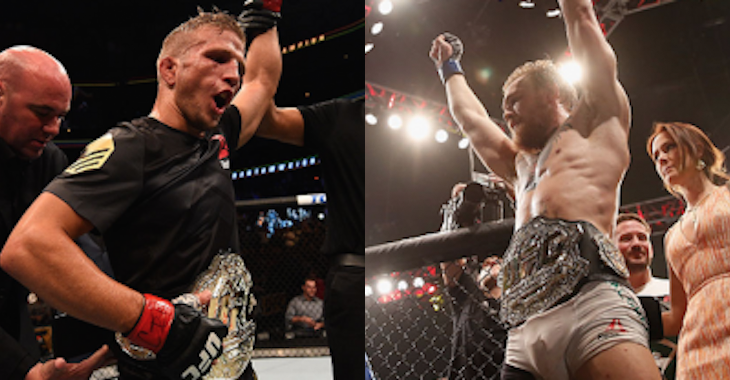 Team Alpha Male’s Urijah Faber just wrapped shooting on the new season of The Ultimate Fighter, where he coached opposite of interim featherweight champion Conor McGregor.

The two will not be fighting at the conclusion of the broadcast, like most seasons, because of course McGregor will be taking on champ Jose Aldo at UFC 194 to unify the titles.

One fight that Faber can see happening down the road is a scrap between McGregor and his teammate and bantamweight champion TJ Dillashaw, who apparently have gotten into it on several occasions.

Check out what he told Submission Radio:

“It’s funny ’cause Conor and I have been around each other and have an interesting relationship, but him and TJ on two different occasions have gotten into it with things escalating to, you know, them kind of bad mouthing each other. So there’s a little tension there as well and I think that’s a good fight the fans would love to see.”

“One time TJ and Conor and I in the back of the Ronda Rousey fight in LA, we were in just a private little bar with celebrities and the UFC brass and words were exchanged, and TJ was talking about Conor’s title shot and Conor went back and forth and they were getting on each other’s nerves, really. So I think they ended up having to be split up a little bit. And then when TJ was on the show.”

This article appeared first on BJPENN.COM
Previous articlePaige VanZant Comes To The Defense Of Rousey –– ‘They’re Just Jealous’
Next article‘Weidman beat a one-legged spider, a fireless dragon and an old lion with no balls’
© Newspaper WordPress Theme by TagDiv