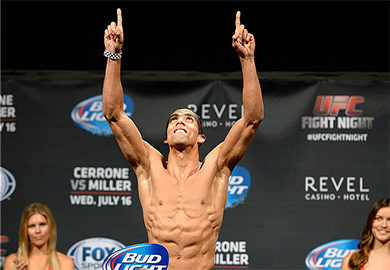 UFC lightweight Edson Barboza has cracked the top 10 of the UFC’s official ranking ladder in the lightweight division with his first round TKO win over Evan Dunham this past Wednesday at UFC Fight Night 46: Cerrone vs. Miller.

Barboza was riding a three fight win streak that included a submission win over Lucas Martins, a TKO win over Rafaello Oliveira, and a majority decision win over Danny Castillo. Barboza then faced Donald Cerrone at UFC on Fox: Werdum vs. Browne where he was dropped with a jab before tapping to a rear-naked choke. Barboza bounced back against Dunham however this past week, winning the bout in the first round via a body kick.