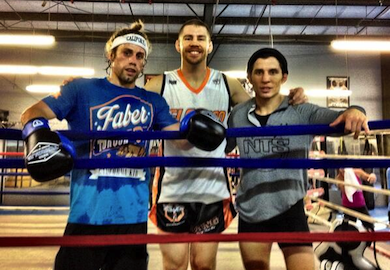 Despite all the success of the Team Alpha Male squad since bringing in UFC veteran, Duane Ludwig, it looks as if the relationship is being terminated.

A reason for the departure is not known, but there is nothing out there leading us to believe the shift is due to any unfavorable conditions.

According to UFC Tonight, Ludwig, will serve his term in Sacramento and be gone on May 24.

On the official Team Alpha Male Website, they have posted a press release / job listing for a new head coach.

Here’s that:
Press Release: Sacramento, CA March 19th
Team Alpha Male, a world renowned Mixed Martial Arts team based out of Sacramento, CA is looking to fill the position of head coach. TAM will be taking applicants from around the world over the next few months and will be looking to fill the position no later than May 24th. The team is comprised of current and former UFC fighters Urijah Faber, Chad Mendes, Joseph Benevidez, Danny Castillo, TJ Dillashaw, Chris Holdsworth, Andre Fili, Paige VanZant, David Mitchell and Justin Buchholz. There is also a promising crop of next generation fighters that are on the cusp of fighting at the highest level. Top Prospects like Lance Palmer, Anthony Avilla, Alex Sandoval, Michael Nakagawa, Derek Burnsed, Veronica Rothlenhausler, Jonathan Svensson, Vince Murdock, Josh Emmitt, Solomon Alhmandar, Freddy Aquatana and many more. In addition we have some of the most accomplished and highly ranked amateurs in the sport in Joseph Morales, Erik Sanchez, Angelo Trevino, and Cynthia Calvillo. The head coaching position would oversee the current TAM coaching staff which includes Fabio “Pateta” Prado, Dustin Akbari, Lance Palmer, Joe Guevara, Justin Buchholz and Billy Olson. TAM is known for a unique co-op style of learning and mentoring where top professionals work with and add to the overall growth of the team as a whole.
Applicants must be willing to move to Sacramento, CA full time to run the TAM curriculum. They will be expected to help grow the team from the amateur level to our top Pros.
For more information please contact Tommy Schurkamp at Tommy@TeamAlphaMale.com