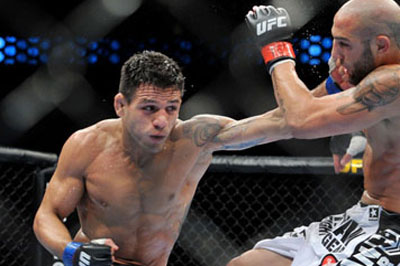 Fighters Only Magazine has reported that UFC veteran Paul Taylor (11-6-1) has been injured and will not fight against Anthony Njokuani (15-6) on the UFC on Fuel TV 4: “Munoz vs. Weidman” card. Fighting in his place will be Rafael dos Anjos (16-6)
This comes as a huge blow to Taylor who hasn’t fought since his knockout win over Gabe Ruediger at UFC 126. Taylor was surely looking for a big fight to get his name back up the list in the stacked lightweight division.
Dos Anjos is coming off of a first round submission over Kamal Shalorus on May 15th, which marked the last Fuel card for the UFC. Dos Anjos is looking to make it two in a row and build up confidence to make a run at the title.
For Njokuani, he looks to start a win streak as he defeated his last opponent, John Makdessi at UFC 145 back in April. Njokuani is a dangerous muay thai practitioner who utilizes deadly kicks, knees, and elbows.
This has all the makings of a great stylistic matchup between two talented lightweights.