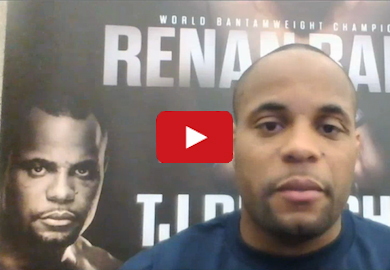 “I work harder, because I know that Dan Henderson is a guy that has been around the block a time or two. He beats everybody up, he has won at every level and it’s an opportunity for a passing of the torch.”

Daniel Cormier on if his admiration for Henderson affects his mindset entering the fight: “I still have the same mindset, because it doesn’t matter. Dan is just another roadblock in my journey to the championship. As much as I like the guy, my admiration of him does not outweigh my desire to be the champion.”

Daniel Cormier reacts to people saying he is overlooking Henderson and focusing on Jon Jones: “I would say that it would be crazy. I know all that he has done, I was in the Greco-Roman pipeline as a kid when Dan was on the Olympic team, I know how accomplished this guy is. I answer questions about Jon Jones because people ask me questions; I don’t care about Jon Jones. I don’t go to bed at night thinking about Jon Jones, I go to bed at night thinking about Dan Henderson, and that’s what my focus has been.”