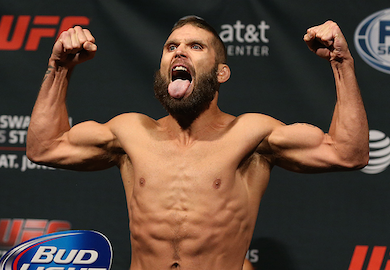 A key featherweight bout will serve as the co-main event for the “TUF 20 Finale” in Las Vegas, as UFC officials recently announced that Charles Oliveira and Jeremy Stephens have been booked as the evenings co-feature.

Charles Oliveira was supposed to fight Nik Lentz at last month’s UFC Fight Night 50 event. However, “Do Bronx” failed to make the featherweight limit and then wasn’t cleared to fight after falling ill with a viral infection.

Prior to that incident, Oliveira had strung together 2-straight victories, which he earned by submitting opponents Andy Ogle and Hatsu Hioki respectively.

Meanwhile, Jeremny Stephens was last seen in action in the main event of UFC Fight Night 44 where he lost a hard fought decision to perennial contender Cub Swanson. That loss snapped a 3-fight win streak for “Lil Heathen,” who had defeated Estevan Payan, Rony Jason and Darren Elkins since dropping down from lightweight to 145-pounds.

The TUF 20 Finale is set for December 12 live from the Hard Rock Hotel & Casino in Las Vegas. The event, which airs on FOX Sports 1, will crown the UFC first ever women’s strawweight champion.

Who do you have winning this featherweight matchup? Sound off Penn Nation!