Chael Sonnen vs. Wanderlei Silva Is Official, Will Be The Co-Main Event at UFC 173 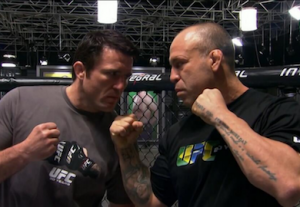 The heated battle between UFC fighters Chael Sonnen and Wanderlei Silva finally has an official date. UFC president Dana White confirmed that the fight between the current coaches of Brazil’s 3rd “The Ultimate Fighter” season will meet in the octagon on May 25, at UFC 173.

White announced the fight during UFC 169’s post-fight show on Fox Sports 1. We already know that the UFC middleweight title fight between champion Chris Weidman and challenger Vitor Belfort will headline the event.

There has been a lot of buzz for this fight for a while now and it seems like it’s only going to grow when their TUF season airs. News of a physical altercation between the two coaches while filming has already ignited a new level of excitement for their fight inside the cage.

UFC 173 will take place on May 25 in Las Vegas. The venue has not been announced.