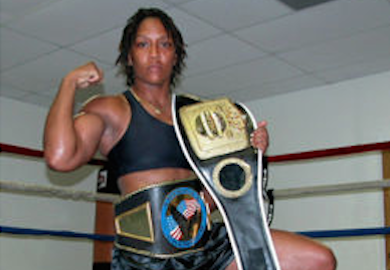 UFC Women’s Bantamweight champion Ronda Rousey recently made headlines when she stated that she believed she could beat Floyd Mayweather Jr in a fight.

Those comments were of course taken out of context, as in the video you can see that “Rowdy” is clearly joking and is actually completely afraid to fight Floyd standing, saying she would ‘bear crawl’ to him hoping to get the fight to the ground.

Apparently Rousey’s playful comments did not sit well with former women’s boxer Anne Wolf, who told reporters that she would “F*ck Rousey up!”.

Here is how it all went down:

Anne Wolfe was in Las Vegas for this past weekend’s Boxing bout between Canelo Alvarez and Alfredo Angulo. She was eventually interviewed by the media while hanging out with Brandon Rios. After Rios said that Wolfe was the only female that really scares him, the interviewer asked what would happen if Wolfe fought Ronda Rousey.

Asked if she meant MMA or boxing, Wolfe responded, “I don’t give a fuck, we can meet in the streets. I don’t disrespect or nothin but…”

When Rios said that “MMA is kind of like street fighting,” Wolfe one more time stressed her ultimate feelings on the matter, “I’d tear that ass up.”