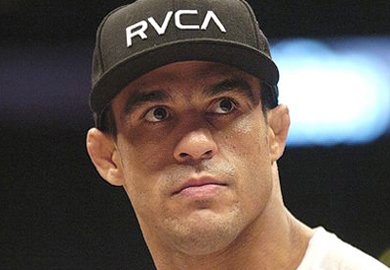 Today, via Twitter, Vitor Belfort has stated that he has personally asked Joe Silva for a fight with Chris Weidman for the next shot at the middleweight crown. Belfort claims that he believes Weidman is next in line but thinks that they should still fight just to clear up any argument as to who the true number one contender really is so that Anderson Silva can truly face the best competition.

No word on if this fight will materialize, especially with Alan Belcher also campaigning for a shot against Belfort and with two other contenders, Michael Bisping and Brian Stann, set to fight at UFC 152 in a fight that they believe will grant the next contender.

“Guys I spoke to joe silva and ask to fight with the top contender #weidman here in brasil so I think this is the fight that will credence me to a title fight so that is what happened.
I want the belt but I am not desperate I think weidman is the next for the belt, but Anderson silva deserve to see who is next. So let`s make this fight the next #contender belfort vs weidman the next contender for #andersonsilva”

Stay Tuned to BJPENN.com for all the latest MMA and UFC news.