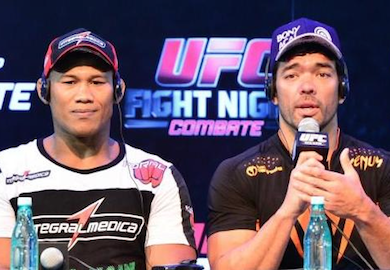 Anderson Silva has had a change of heart.

At one point in the former champion’s career, he refused to fight his ‘Team Black House’ training partners, Lyoto Machida and Jacare Souza.

However, those two fighters failed to deliver on that same type of loyalty.

Now that they are both in the UFC’s middleweight division, the duo has frequently stated they would fight Anderson when asked by the MMA media.

Those comments haven’t gone unnoticed by Silva and as a result, he’s changed his mind.

“That is something that I have always said, about not fighting a training partner, but it isn’t reciprocal. Inside Team Nogueira we follow this but Lyoto isn’t from Team Nogueira and neither is Jacare then it’s a vague situation. In all their interviews they said clearly that they would fight me so I can’t think differently. I don’t want to fight a friend, mainly Lyoto, but if I in the future I have credentials to fight for the belt and we have to fight, we will fight.”

Be honest, would you shy away from a Machida vs. Silva fight?