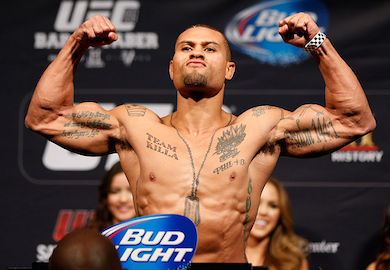 Abel Trujillo was originally scheduled to fight Myles Jury later this month at UFC Fight Night 44, but Jury was forced to pull out of that fight with an injury.

“Killa” was last seen in action at February’s UFC 169 event in Newark, where he earned a knockout victory over former WEC lightweight champion Jamie Varner. That victory earned Trujillo 2 performance of the night bonuses, which totalled $100k. Prior to his bout with Varner, Abel was coming off a TKO win over Roger Bowling, which he scored at the “UFC on FOX 9” event in Sacramento.

Meanwhile, Bobby Green will be looking to stretch his current win streak to 8 in a row when he faces Trujillo in Los Angeles this August. Green was most recently seen in action at December 2013’s “UFC on FOX 9” event, where he scored a unanimous decision win over Strikeforce veteran Pat Healy. Prior to his win over “Bam Bam,” Green defeated James Krause via TKO at the UFC’s “Fight for the troops 3” event in Fort Campbell.