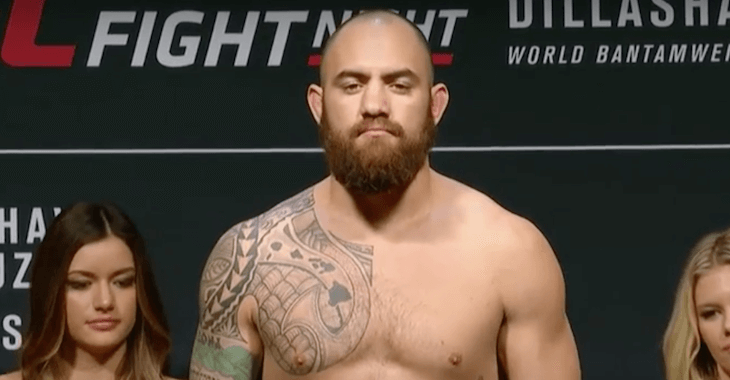 Travis Browne opens up with a front kick that misses. He tries a kick to the body. Mitrione charges forward with punches but doesn’t connect. Good leg kick lands for Matt. Decent right from Mitrione. Body kick from “Hapa”. Matt misses with an attempted body kick. Left jab from Mitrione. Good knee from Browne. Followed by a front kick to the body. Mitrione responds with a kick of his own. Nice right hand from Matt. “Hapa” with another front kick. Big right lands for Matt. Travis falls down but gets up and seems to be ok. Both men are showing a lot of respect for one another. Mitrione attempts a lead left but gets an accidental poke in the eye from Browne. We restart and the horn sounds before either fighter decides to engage.

Round two begins and Mitrione tags Browne with a left. Another poke to the eye from Browne but the ref doesn’t see it. Travis charges after Matt but Mitrione is able to defend well while recovering from what was a clear thumb in the eye. Suddenly the referee stops the bout because he realizes Matt is hurt. The doctors come in to examine the wounded fighter. We restart and “Hapa” is landing some kicks to the body of Mitrione. Matt is pressing forward but struggling to land. Good kicks from Browne. Matt responds with a left. Trip scores for Browne and he moves to side control on Mitrione. Browne moves to top position but it allows Matt to scramble to his feet. Good knee by Browne and he follows that up with a kick. Another good knee to end round two by “Hapa”.

Round three begins and both men are slow to get off. A good right hand lands for Browne. Shot to the body be Mitrione but Travis gets Matt’s back and slams him down. Browne immediately moves to full mount and begins landing bombs. Big shots from Browne. Mitrione can’t shake hime. Big elbow from Browne and another. More shots from Browne and the ref steps in to stop it.

Travis Browne defeats Matt Mitrione via TKO in round 3