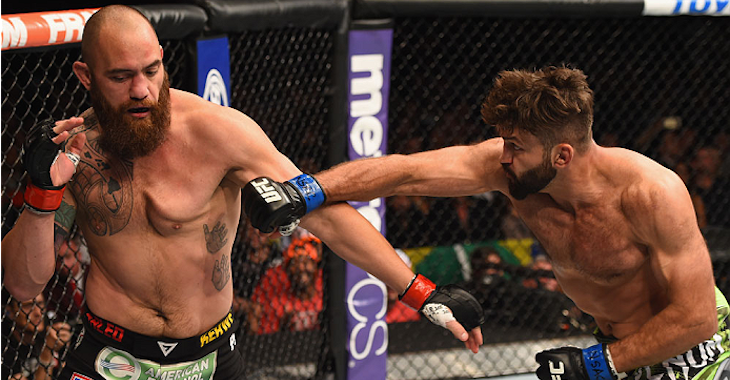 Earlier today, UFC heavyweight Travis Browne was accused of domestic abuse when his ex-girlfreind posted a picture on Instagram showing bruises that covered her body. She also said in a comment on the post that it was Browne who she was referring to.

Later, at the UFC 189 press conference, the UFC’s Dave Sholler read this statement from the UFC.

“UFC is aware of the social media allegations made against heavyweight Travis Browne. The organization requires all athletes to act in an ethical and responsible manner, as mandated by the UFC Fighter Conduct Policy. UFC will not tolerate domestic violence or any other violation of the policy. Every athlete is deserving of due process and this situation, as with any official allegations, will be duly reviewed and thoroughly investigated by an independent party. In light of this news, Travis will not be participating in this week’s UFC International Fight Week activities in Las Vegas.

“The prevention of domestic violence and the education of the athletes is of the utmost importance to the organization. UFC holds its athletes to the highest standard and will continue to take appropriate action if and when warranted.”

We will keep you posted.