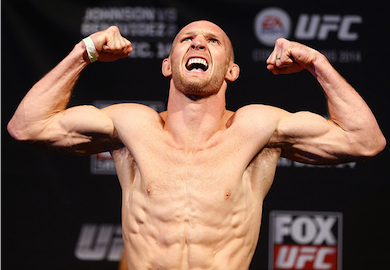 Court McGee and Ryan LaFlare put on an extremely even first round. LaFlare landed more strikes than McGee, but McGee caused visible damage and cut him on the left eye. LaFlare impressed early on by picking up and slamming McGee down three times in a row, but nothing would come of it. LaFlare defended some takedowns late in the round and that likely gave him the nod to take round one.

LaFlare impressed with his striking again early on in the second round. LaFlare nailed him with nice combinations and tried to chop McGee down with body kicks. Every time LaFlare landed a combination, McGee countered with a hard shot of his own. LaFlare started to really gain momentum after he took McGee down and landed some short punches. McGee popped right back up, but he was cautious of the takedown for the remainder of the round.

Whenever McGee thought he had something going for him, LaFlare would either be one step ahead of him or land one more shot in an exchange. Court McGee took Ryan LaFlare down and went right into full mount, but LaFlare never stopped defending the takedown and rolled through to his feet. LaFlare gave McGee a receipt on the cut he suffered in the first by bloodying McGee over his left brow. McGee walked back to his corner dawning a crimson mask at the end of the second.

Court McGee walked into the third down by two and opened up the round with a high volume of strikes. Once again, whenever McGee would land a shot LaFlare would answer with one of his own that was just as good. McGee took LaFlare down, but LaFlare got right back to his feet after launching himself off the cage with his feet.

After the takedown, McGee started to get the best of LaFlare while standing. He changed levels and attacked the body more than the head, which opened up the opportunity for strikes to the head later on. McGee would abandon his striking game though as he went to his bread and butter of takedowns. McGee ended the third round on top, swinging for a victory. The horn sounded and both men bounced to their feet with their hands raised.

Only one would be rewarded the victory after the judge’s decision was read, and it was Ryan LeFlare.