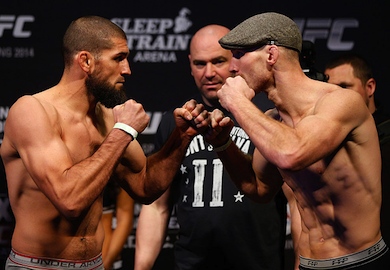 If you aren’t a ticket holder for tonight’s fight card and/or cannot make the live broadcast of the event on television, join us right here on BJPENN.COM to follow along with all the blow-by-blow and round-by-round action on the preliminary portion of tonight’s fight card.

Round 1 – Both fighters meet in the center of the octagon. Fighters trade leg kicks.Uyenoyama shoots and gets the takedown.   Ozkilic gets the reverse and lands on top in guard. Both men are back to their feet.  Looks for a single leg takedown again, dosnt get it.  Shoots again, drives Ozkilic to the fence. Ozkilic gets a trip and take down. Ozkilic is in gurd.Uyenoyama is contasntly attaking off his back. Ozkilic not doing much from the top position. Throws a few wild throws. Lets Uyenoyama stand.  Uyenoyama lands a nice leg kick. round over.

Round 3-Uyenoyama throws kicks starting the round. Ozkilic lands a huge right. Ozkilic is picking up the pace and throwing bombs. Fithers clinch. Ozkilic gets the takedown, in full gurd.  Uyenoyama trying to attack from the bottom. Ozkilic stands up.Uyenoyama throws a crazy wheel kick, fails to connect. Ozkilic lands another huge right. continues to throw massive punches. Ozkilic sems to be the fresher fighter.Uyenoyama pulls guard again. Ozkilic on top in full guard.Uyenoyama trying to land elbows from the bottom. Ozkilic stands up. Throws another power punch, then gets the takedown. Ozkilic again stands up. both fighters trading punches.Uyenoyama goes for a spinning back fist. misses.

Round 2- Bowling throws a hard leg kick, but Trujillo immediately shoots and gets the takedown. fighters stand back up. Trujillo again looks for a takedown and gets it . Trujillo is in full guard, postures up and lands a huge punch. Trujillo senses Bowling’s hurt and starts to pile on the punches. Bowling gets to his feet but Trujillo is merciless in his attack and the referee stops the fight.

Winner- Trujillo via second round TKO (1:35)

Round 1 – McKenzie immeidilty goes for a a takedown and gets it. is in halfgaurd. McKenzie stays on top, Stout uses the cage and gets back to his feet. McKenzie is relentlessly going for the takedown. Gets Stout against the cage. After a short time Stout breaks free and meets McKenzie in the center of the octogoan. Stout is trying to get things going on the feet. McKenzie again looks for a single leg, fails to get the takedown. He shoots again, another fail. Stout is throwing some nice body kicks. Stout lands a leg kick. Stout lands a huge right hand to the body, drops McKenzie. Back to his feet, but Stout lands another body shot. Round ends with both fighters on their feet.

Round 2- Fighters exchange punches. McKenzie shoots again. does not get the takedown. Stout is really landing those body kicks. Stout looking for more body shots. McKenzie is still looking to get the fight to the ground, but Stout is stuffing every attempt. Stout again throws a hard body kick. McKenzie is throwing very awkward jabs, nothing really behind them. Body punch from Stout. This round is all Stout so far on the feet. McKenzie looks for another takedown, stuffed. Fighters are circling the octagon. Round ends, all Stout.

Round 3- Fighters touch gloves. McKenzie has picked up his pace. Stout still dominating in the stand up. Stout is picking McKenzie apart with kicks and punches to the body. McKenzie looks for a takedown, stuffed, Stout tries to lock up a choke. Decides to let it go and stand up. Fighters stand and exchange shots. The fight briefly hits the mat with Stout on top, but quickly stands up. McKenzie throws a spinning elbow, misses. Stout still landing body shots. Stout ramps up the pressure, McKenzie gets Stout’s leg in a takedown and looks for a leg lock, Stout is able to get back to his feet and out of danger. The round ends with both men on their feet. The Sam Stout stand up show is over.

Round 1 – Fighters touch gloves. Makozsky lands a leg kick. then another. Makozsky comes in, Jorgensen lands a few good ounches. Makozky lands a good knee to the body. Makozsky wraps up Jorgensen, but doesn’t get the takedown. Jorgensene comes in with a right hand, then gets Makozsky against the cage. After a short time fighters seperate. Jorgensen lands a huge punch. both fighters continue to land huge shots. Jorgensen gets Makozsky against the cage, Makozsky on his knees, Jorgensen looks to lock up a guillotine. Makozsky gets to his feet and the fightes again circle. Makozky lands a good staight left. Makozky wobbles Jorgensen with another huge punch. Makozsky stays calm and continues to stallk Jorgensen. Jorgenses gets the fight to the ground, Makozsky reverses and gains full gurad. round ends.

Round 3- Makozsky throws a spinning back fist, misses,but does land a superman punch a moment later. Fighters are exchaning shots, Jorgenson gets Makozsky against the cage. Fighters break apart. Makozsky shoots for a single leg, Jorgensen gets the reversal and lands on top in full guard. Makozsky tries to get up, does so and lands a single leg takedown. Manages to get to Jorgenson’s back. Jorgensen again reverses and gets on top. Then up to his feet. Makozsky landing some good punches. He shoots again and gets reversed again, then returns the favor and reverses Jorgenson. Makozsky is on Jorgenson’s back. tries to lock up the Rear naked choke. Fight ends with Malozsky on Jorgenson’s back.

Round 1 – Green rushes to Healy. Fighters trade punches. Green takes Healy down, gets his back. Healy gets back to his feet. Green has his hands at his waist. Healy trying to find his range, but Green is able to allude his strikes so far. Green lands a good punch. Green appears to be extremely loose. Healy gets Green agains the cage and works for a takedown. Green is able to stay on his feet and break away. Healy lands a punch, Green urges his to keep coming. Healy continues to press forward, gets Green agains the cage again. Healy gets to Green’s back. Green gets back to his feet and gets away from Healy. Healy is throwing constiantly. but Green is able to stay out of danger. Close round.

Round 2- Healy still presses forward. Green is slipping away from the strikes with ease. Green still refuses to keep his hands up. lands two jabs to Healy’s face, then slips away. Green gets behind Heal in the clinch and eventually pushes Healy agains the fence. After a brief moment, both fighters seperate. Healy gets a hold of Green and throws him down. Healy lands some shots, Green gets back to his feet. Both fighters are landing punches on the feet. Green is taking deep breaths. Green looks for a takedown, fails to finish. Healy is starting to land more punches. Healy gets Green against the cage. Green gets away and again the fighters throw pucnhes. Green gets a takedown at the end of the round. Another close round.

Round 1 -Fighters touch gloves and waste no time. Castillo looks for the early takedown. Fails to get it. Fighters are feeling eachother out, Barboza throws some hard leg kicks. Castillo trying get in close for the take down. Castillo lands a huge punch that rocks Barboza, Castillo throws more shots then gets the takedown and goes straight to his back. Castillo ends up in full guard, throwing big shots. Castillo refuses to let up. has Barboza pinned against the cage, on his back. Castillo goes for the rear naked choke, again Barboza gets out of it and back to gaurd. Castillo cut Barboza open with a huge elbow to the head. Castillo stays on top and keeps landing with huge punches. Barboza trues for a heel hook, but castillo spins out of it and lands on top again. Castillo ends the round on top. Dominaiting round for Castillo.

Round 2- Barboza throws a switch kick right away. Castillo looks for a quick takedown, but doesnt get it. Barboza throws a huge leg kick, then another. Barboza again lands one of his vicious leg kicks. then he lands a huge spinning back kick to the body of Castillo. The leg kicks keep coming from Barboza. Kick after kick coming from Barboza. Castillo looks to have tired himself out in the first round. Barboza continues to pick Castillo apart with leg kicks. another spinning kick, but Barboza slips, Castillo lands a punch while he’s getting up. Castillo lands a body shot. The kicks of Barboza are drastically changing this fight. Barboza lands a huge left hook that drops Castillo. Barboza goes in and tries to lock up and choke. Castillo gets out and is on bottom, while Barboza is in half gaurd. Barboza stands and both fighters end the fight standing.

Round 3- Fighters touch gloves. Barboza goes right to the leg kicks. Castillo lands a good left hook. Barboza throws a strong right hand. Castillo has yet to go for a takedown in this round. Fighters standing and trading shots. Finally Castillo looks for a takedown, doesn’t get it. Barboza goes right back to the leg kicks. Castillo trying to land a huge punch. Barboza lands a spinning back kick to the body, hurts Castillo. Barboza goes in with some more punches and kicks to the body. Castillo seems to have recovered. both fighters circling and throwing punches. Castillo takedown stuffed. Barboza shoots and gets a takedown, briefly, then Castillo gets back up. Fight ends with both men standing. What a fight!

Round 1 – Fighters come out and start throwing right away. LaFlare gets the takedown, McGee gets back up, then is taken right back down, gets up and free. McGee lands a good flurry of punches. LaFlare gets the clinch and lands a quick knee, then break apart. LaFlare has a small cut by his right eye. both fighters throwing good combinations, no one really landing anything significant. LaFLare throws a leg kick, McGee catches it and gets the takedown. LaFlare looks for a leg lock, McGee breaks free. Both fighters get back up. McGee landing good body shots. Lands another body kick. LaFlare spins for a punch, McGee gets a hold of him, LaFlare breaks free. The round ends.

Round 3-  Fighters touch gloves. McGee looks to go right to work. McGee catches kick and goes for takedown, LaFlare fights it and gets away. Good Leg kick from McGee. Each fighter throw hard body kicks. McGee pushes LaFlare against cage and gets takedown. McGee looks for a guillitone. LaFlare gets out and back up. Both men continue to throw punches, keeping a very active pace. McGee again gets LaFlare against the cage, after a brief takedown, LaFlare gets up. LaFlare shoots for a takedown and gets it, but McGee jumps right back up. McGee again looking for a takedown against the cage. Lets it go, then goes for it again and gets it. McGee looking for a guillotine, LaFlare gets out of it again. The fight ends with McGee on top.