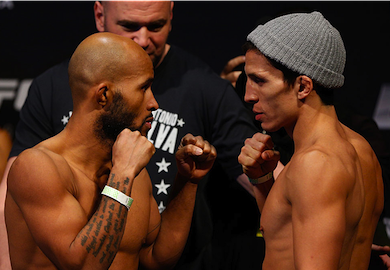 If you aren’t a ticket holder for tonight’s fight card and/or cannot make the live broadcast of the event on television, join us right here on BJPENN.COM to follow along with all the blow-by-blow and round-by-round action on the main portion of tonight’s fight card.

Round 1 – They come out and touch gloves, Danzig in the center but Lauzon backs him up, they gauge distance and trade jabs. Danzig tries to back him up with a stiff jab. Lauzon comes forward with a combo, clinches and gets the takedown. Lauzon ends up in Danzig’s half guard, but passes to mount. Big elbow by Lauzon as he rolls into an armbar. Danzig gets out and is in Lauzon’s guard. Lauzon gets butterfly guard, he goes for another armbar and switches to a triangle, transitions to an omoplata but Danzig gets out. They stand up and Danzig clinches with Lauzon on the cage. Lauzon backs him up and they trade strikes in the clinch. Lauzon spins Danzig and puts him on the cage. Danzig reverses position and pushes Lauzon on the cage, Lauzon reverses and gets the trip. 30 seconds left, Lauzon is in Danzig’s guard. He lands some short punches from Danzig’s guard as the round ends.

Round 2 – Danzig takes the center, Lauzon circles and lands a lead hook. Lauzon coming forward with combinations but doesn’t land. Danzig throws a 1,2 combo finished with a leg kick that lands. Lauzon clinches and lands a knee. Danzig lands an elbow and then 2 punches. Lauzon with another knee, Danzig comes forward and lands another 1, 2 leg kick combo. Lauzon clinches but gets pushed against the cage, he reverses it and they trade punches in the clinch. Lauzon gets the trip and ends up in Danzig’s guard. Danzig eats a big elbow that opens up a cut above his left eye. Another elbow by Lauzon, Danzig looks for a triangle from high guard but gives up on it. Now Danzig looking for a guillotine but he lets it go. Danzig bleeding a lot now, Lauzon steps through to half guard. Danzig gets butterfly guard, Lauzon trying to step over to side control and he gets the mount. Lauzon sits back for an armbar as the round ends.

Round 3 – Danzig landing a series of hooks, Lauzon throws some jabs but eats a few punches and a leg kick. Danzig and Lauzon headbutt and Big John McCarthy steps in for a second but they continue. They trade and both men land. Danzig is getting the better of these exchanges as Lauzon eats a body shot. Lauzon backing him up but he eats a stiff jab. Lauzon clinches and gets the trip. He ends up in Danzig’s guard and passes to half guard, now Lauzon gets side control. Lauzon looking for a mounted crucifix. He lands elbows from here as Danzig’s face is bleeding again. Lauzon gets the mount and lands more elbows. Danzig tries a sweep but it fails, Lauzon looks for an armbar but settles to land more hard elbows, this time to the body. Lauzon sits back, but loses it as Danzig gets his guard. Lauzon tries for an armbar but Danzig gets North South from the back. Lauzon sweeps and gets guard, but then passes to half guard. Lauzon passes to side control, he lands another big elbow as the round ends.

Round 1 – Mendes takes the center, Lentz lands a combination and backs Mendes up. Mendes lands a leg kick and a huge combination that rocks Lentz. Lentz recovers but eats another big shot as he comes forward. Mendes catches a kick but lets it go. Mendes lands a leg kick as Lentz eats more shots. Mendes lands a takedown and ends up in Lentz’ guard. Lentz backing up towards the cage and he gets up. They trade combinations. Lentz looking bloody and bruised as we approach 1:30 left in the first. Lentz pushes forward with a combination but gets taken down. Lentz in butterfly guard as he lands some body shots. Mendes gets off Lentz and lands heavy shots as Lentz gets up. Mendes shoots and gets another takedown. Mendes lands some punches from the top as the round ends.

Round 2 – Lentz takes the center Mendes dodges a combination. Mendes lands a leg kick and eats a combination. Mendes changes his stance and lands a leg kick. Lentz lands one of his own as Mendes slips a combination and lands a jab. Lentz misses a body kick and eats another jab. Mendes eats a body kick and lands a leg kick of his own. Mendes eats a hook and circles back to the middle of the cage as he lands a big overhand right. Lentz pushes forward with a combination and he gets taken down. Lentz gets him in guard and they stand up. Mendes eats a 1, 2 combination as he looks for a takedown but gives it up as he eats a body kick. Mendes lands a takedown as Lentz looks for a guillotine but lets it go. Lentz landing shots from the bottom as Mendes sits in his guard. Joe Rogan comments on Mendes’ lack of ground and pound. Mendes lands an elbow as Lentz launches Mendes off of him. They stand as Mendes lands another heavy punch, Mendes gets another takedown. Not much activity from Mendes on top at the bell rings.

Round 1 – Faber takes the center of the octagon and lands a head kick, he shoots and gets the takedown. McDonald trying to work the rubber guard and he traps the left arm of Faber. He looks for an omoplata but gives it up and gets his arm free. Faber lands some shots from the top. Faber lands more ground and pound as McDonald eats an elbow. More ground and pound from Faber, Herb Dean stands them up. Faber lands a leg kick and an overhand right. McDonald lands a leg kick and eats a front kick to the body. Faber misses with a head kick as he catches a kick and lands a hook before letting the leg go. Faber eats a combination and misses an overhand right. McDonald looks to throw a front kick but changes his mind as he eats a hard punch. Faber connects with a hard lead left hook as the round ends.

Round 2 – Faber takes the center of the Octagon again to start the round as he slips a bomb from McDonald. McDonald misses an uppercut as Faber looks for a takedown but it’s stuffed. McDonald blocks a head kick and eats a lead left hook. McDonald eats an inside leg kick that lands low, Herb Dean stops it and gives McDonald time to recover. They start up against and Faber lans a front kick and then an overhand right that rocks McDonald. Faber lands a front kick to the head that stuns McDonald again. McDonald recovers as he slips out of Faber’s clinch. Faber lands another lead left hook and then a front kick to the body. Faber misses a leg kick and then eats one as he tries to clinch but fails. Faber blocks a hook from McDonald and he ducks a head kick and then lands a huge overhand right that has McDonald rocked, McDonald eats another huge shot and is running backwards, Faber hunts him down and lands another huge shot that drops McDonald. Faber sinks in a guillotine and McDonald taps.