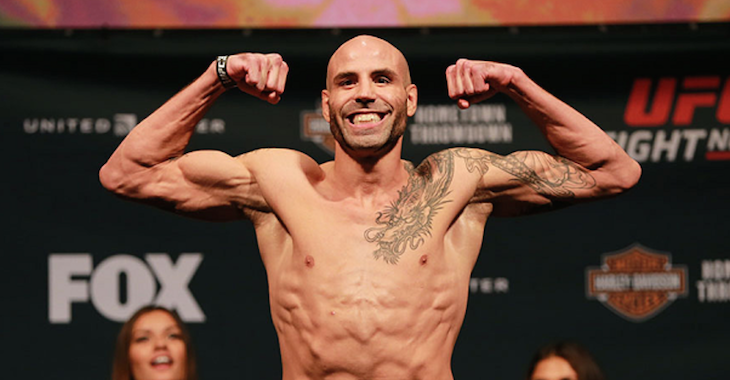 Killa B, Ben Saunders took on Kenny Robertson in the UFC’s welterweight division.

Saunders came out with the kicks. After a brief exchange on the feet Saunders went in and clinched. The fight went to the ground but it was Robertson on top working out of Saunders’ guard. Saunders locked in a triangle, then switched to an omoplata. He failed to get it and the fight went back to the feet. Standing, Saunders landed a lot of body kicks and looked to be picking Robertson apart, then late in the round Robertson dropped Saunders with a big punch. He tried to rush in but Sauders survived and held onto him until the round ended.

In the third Saunders looked to pick him apart with kicks and punches, but Robertson kept landing with big punches. The fight was paused when Robertson ate a kick to the groin. The fight started back up and picked up right where they left off. Saunders threw kick and tried to land straight punches while Robertson kept coming in close and looking to land big punches, which he was connecting with. With about a minute left they just started swinging at each other. Saunders, with his back on the cage just stood there and tried to sway and land punches while Robertson did the same.

The slugfest continued in the third round. Robertson tried for a spinning back fist, failed, then went for a takedown and got it. Right away Saunders tried for a triangle. He locked it up and started landing elbow after elbow to Robertson’s head. Saunders held onto it for a very long time and continued to land elbows, eventually cutting Robertson open. With about 20 seconds left in the fight Robertson finally got out.