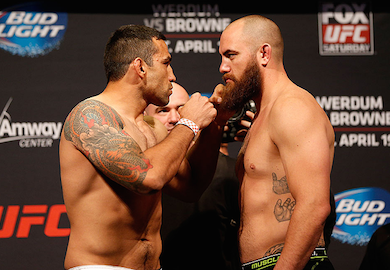 If you ‘re not in Orlando today with tickets in-hand or can’t catch the televised card on FOX, follow along with us here as we break down every blow, every submission, and ever strike, in real-time, right here in this very thread.

Round 1 – Tavares with a one two. Tavares lands a good right hand. Missed body kick by Tavares. Leg kick by Tavares. Leg kick from Tavares, then one from Romero. Romero lands a huge straight left, then gets a takedown. Now Tavares has Romero against the cage, trying for a takedown. He fails and Romero gets another throw takedown. Romero is in side control. Tavares stands but Romero has his back. Tavares trying to break the grip. Romero holding him against the cage. Romero drops for a single but Tavares breaks free and lands a good punch. they clinch and Romero gets another takedown. Now they stand and Tavares gets a takedown, but Romero fights it off. 10-9 Romero.

Round 2- Romero immediately ducks under and gets a takdown.  Tavares gets to his feet. Tavares comes in and Romero lands a big elbow to Tavares’ head. Tavares is bleeding a lot, probably from that elbow. Romero jumps and lands a big superman punch, than pins Tavares on the cage. Romero is looking for a takedown. Tavares bleeding a lot. Now Tavares is going for a takedown. Tavares trying but failing to get a single leg. He went for it and Romero flipped him over. They stand. Romero lands a punch from close distance. Flying knee from Tavares. Now he has Romero on the cage. Romero switches and has Tavares on the cage. 10-9

Round 3- Both fighters hug. Tavares goes up top with a head kick, it’s blocked. Tavares shoots but is stuffed and put against the cage. Romero lands some knees in the clinch. They break away. Leg kick from Tavares. Tavares tires a head kick. Big left hand from Romero. Romero gets another takedown. They get to their feet. Romero is slipping Tavares’ punches. They clinch and Romero gets the trip takedown. Romero 10-9.

Result- Cerrone wins via Submission (rear naked choke) at 3:15 of Round 1.

Round 1 – Browne with a leg kick, Werdum lands a punch. Browne goes for a big head kick. Fighters clinch briefly. Big right hand by Browne. Werdum gets hurt, Browne is on top landing big punches. Werdum gets to his feet and gets a takedown. Werdum is in top position, half guard. Werdum is looking for an arm triangle. Browne tries to get up, but Werdum stuffs it, now he does get back up. Browne throwing high kicks. Browne looks for a big uppercut but misses. Big body kick by Werdum, followed by a body punch. Leg kick from Werdum. Throws another one but Browne catches it. Wheel kick from Browne misses. Both fighter are taunting. Werdum lands a big uppercut. Spinning body kick from Werdum. Werdum hurts Browne at the end of the round. Werdum 10-9.

Round 2- Leg kick lands to the groin of Browne. The fight continues. Werdum lands a leg kick. Head kick from Browne. Werdum gets Browne down. Browne is trying to get up on the cage. Werdum is looking to work to the back. Browne spins and now Werdum is in half guard. Browne is taking big breaths. Werdum passes to side control. Werdum is landing shots from side control. Werdum is going for an arm. Browne scrambles and gets to his feet. Browne looks tired. Browne’s punches are slow. Good counter from Browne. Spinning back head kick from Werdum misses. 10-9 Werdum.

Round 3- Werdum lands a combo ending with a body kick. Jab from Werdum. Big swinging punch misses from Browne. Werdum lands a spinning back fist. Spinning sweep from Werdum, Browne pushes him down. Werdum rushes in and clinches him against the cage. They break apart. Browne lands a big right hand. Has Werdum against the cage, lands a big knee. Werdum is putting it on Browne. Werdum shoots in and gets the takedown. Browne right back up. Now Browne has Werdum on the cage, they separate. Big back fist from Werdum again. Browne is out of gas. High kick from Werdum is blocked. Body kick from Werdum. Werdum gets restless and unloads a big combo. Werdum 10-9.

Round 5- Werdum gets the takedown. Browne gets right up. Good front body kick from Browne. Leg kick from Werdum. The pace is very slow. Werdum is landing jabs and Browne is looking for a big shot. Big right hand from Werdum lands. Another big right hand. Werdum goes forward landing kicks to the body. Kick misses from Browne. Another one, two from Werdum. Browne swings big and misses. the slowest wheel kick ever from Browne. Browne tries to chase him down in the final seconds but fails to connect. Werdum 10-9.