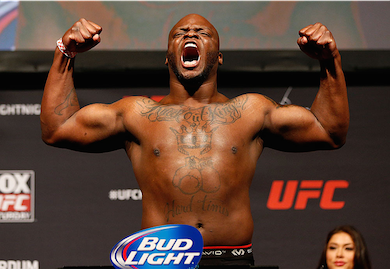 Derrick Lewis and Jack May had the honors of kicking off the fights this afternoon on UFC Fight Pass. We found out that Derrick Lewis has some serious ground-and-pound power after his first round technical knockout win.

During a grappling scramble, May was able to take the back of Lewis and things were looking bleak for him from there. Lewis stood up which bucked May off, and Lewis took this as an opportunity to catch his opponent off guard with a couple huge punches. Lewis landed shot after shot until May had nowhere to go with his back pinned up against the fence. The referee finally called a stop to the fight when May was simply turtling up and covering his face.

Derrick Lewis made sure that his octagon debut was successful. Jack May allegedly tore a tenden in his knee which caused him to give up his back-mount positioning.