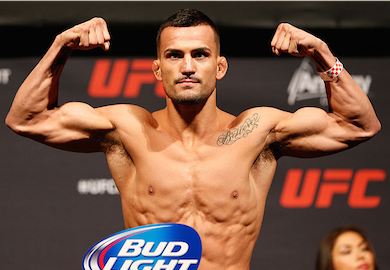 Misrad Bektic impressed in the first five minutes despite being the smaller fighter. He was able to get inside a comfortable striking distance of Skeller and gave him some trouble while standing. When the fight went to the ground, Bektic stayed active in Skelly’s guard. He utilized great posture to surprise Skelly with elbows and punches from different angles.

The fight took a turn for the worst in round two. Bektic got popped with a huge shot that wobbled him and Skelly eventually pushed him up against the fence. Bektic was bent down and put his hand on the mat and that’s when Skelly crashed his knee into the skull of Bektic. Skelly did it again and the referee halted the action to penalize Skelly one point, giving Bektic five minutes to recover.

As Mirsad Bektic got back to his feet he stumbled and needed help from the referee to stay standing. An argument could be made that the fight should have been stopped completely, but Bektic was allowed to continue and he seemed coherent throughout the rest of the round.

It all boiled down to the third round and it was extremely competitive. Bektic landed a couple takedowns but it led to scrambles that saw Skelly almost lock up submissions. Bektic showed great heart by choosing to continue the fight and it paid off; He won the bout by way of majority decision.