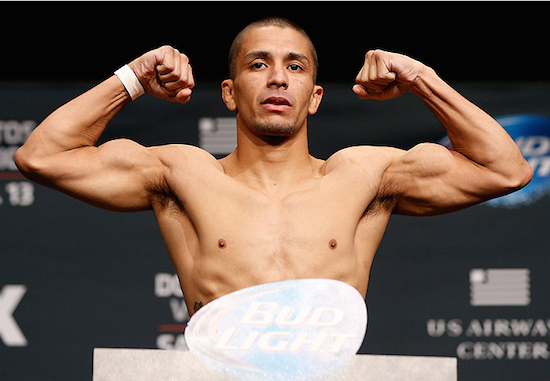 Even though Moraga did not rack up the usual amount of offense, he was methodical and effective in his attack.

The tables turned for a bit when Gates accidentally popped Moraga in the groin and Moraga asked the referee to pause the fight. The referee missed the shot and told them to continue fighting. Moraga proceeded to keep complaining to the referee and took his eyes off of Gates who jumped on the opportunity to catch Moraga off-guard. Even though he was completely in the right, Gates was still booed by those in attendance.

After Moraga recovered, it was much of the same of what we saw early on in the first round: Strategic clinches and devastating leg kicks. While inside the clinch, Moraga worked on the legs of Gates with knees and punches to the thigh.

Gates did a decent job at keeping Moraga at bay with straight kicks and body kicks, but Moraga eventually found a way to get in a comfortable striking distance.

Moraga pressed Gates up against the fence and landed some brutal blows to wear him down. Moraga was eventually able to take him down where he worked for a technical knockout with methodical elbows and punches. These strikes allowed him to transition to full mount where Gates eventually gave up his back to try and survive. Moraga saw an opportunity to go for the rear naked choke and he sunk it in deep. With his back away from the cage, Moraga was able to crank without restriction, forcing Gates to submit.

John Moraga def. Willie Gates by way of Submission (RNC) 4:06 of Round 3