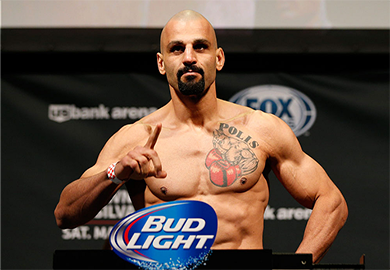 Costas Philippou made a statement tonight by finishing the fight in the first round.

Philippou and Larkin were duking it out in the opening seconds of first round and it was clear that the fight was not going to go the distance.

Costas Philippou forced Lorenz Larkin to backpedal to the cage and he was trapped. Philippou unleashed a straight right and Larkin fell to the canvas, out cold. Philippou jumped right on him and blasted off a couple more shots for good measure. The referee pulled him off and that was all she wrote.

Costas Philippou snapped his two fight losing streak and declared he is ‘back’ during his post-fight speech.

Costas Philippou def. Lorenz Larkin by way of KO (Punches) 3:47 of Round 1