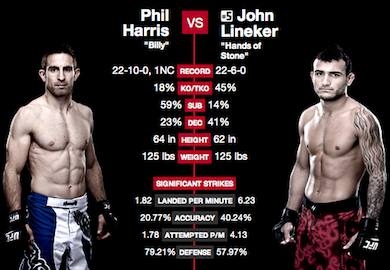 Despite missing weight, John Lineker put on a great display of power in the opening fight of today’s main card.

Phil Harris ate a number of shots early on and was even dropped twice but kept recovering and pressing forward. Harris connected with a couple nice combinations, but they never lead to anything; Lineker was simply too strong for Harris’ offense.

John Lineker landed powerful hooks that sent Harris stumbling backwards, dropping him twice and eventually ended the fight with a hook to the solar plexus.

John Lineker defeated Phil Harris by way of TKO (Punches) 2:51 of Round 1