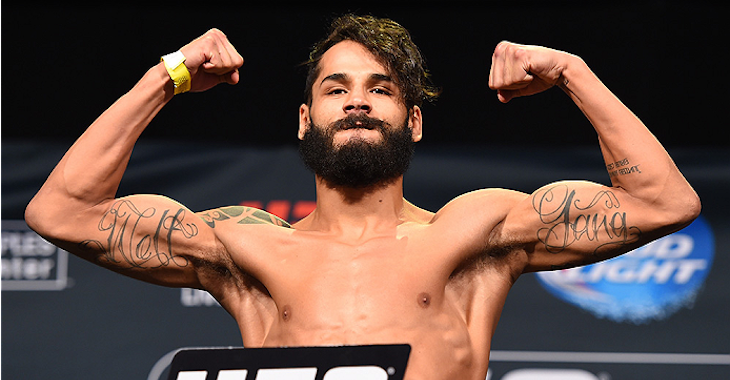 Up first were the featherweights. The first fight of the night and first of the UFC Fight Pass broadcast featured Masio Fullen and Alex Torres.

Born and raised in Columbia, Alex Torres came into the fight with a 2-1 record. His opponent, Masio Fullen, entered the octagon 9-4. The two men competed on The Ultimate Fighter: Velasquez vs. Werdum.

Both men came out swinging in the center of the octagon, with Fullen getting the better of the exchange. Torres, who’s background is in wrestling landed a huge punch that rocked Fullen. Torres moved forward, looking to finish the fight early. Fullen kept his composure and survived the initial onslaught. Torres got a quick takedown but Fullen was able to get back to his feet almost immediately. Torres hurt Fullen again and pushed forward, but Fullen got a takedown that kept him from eating more punches. Eventually Fullen stood up and let Torres get to his feet. The last 30 seconds of the round took place on the feet and again Fullen ate some hard punches that seemed to stun him.

Going into the third it was anyones fight. Fullen looked content with sliding in, landing a punch, then getting out of the way. Fullen landed a huge body to the knee that brought some ooo’s from the crowd. Halfway through the last round Torres started looking for the takedown. He was unsuccessful in the double leg, so instead settled for clinching against the cage. Fullen continued to show strong takedown defense. With 30 second left Torres finally got a takedown, only to have Fullen get up right away.