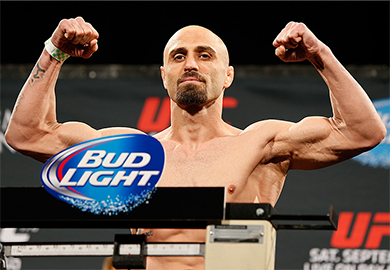 Manny Gamburyan may have earned himself a “Performance of the Night” bonus with his showing in the octagon tonight against Cody Gibson. This was the first bout of the night and it aired exclusively on UFC Fight Pass.

All signs were pointing to Gamburyan losing by technical knockout as he kept getting wobbled with Gibson’s quick hook, but it was an errant leg kick that almost ended it all in the second round.

An overexcited Gibson was off target with a leg kick and blasted Gamburyan with a low blow. Gamburyan let out a scream of pain that echoed throughout the arena and fell to all fours. Joe Rogan claimed that he would not be surprised if the fight had ended, but Gamburyan made it back to his feet and refused to let the doctor come inside the octagon.

Again, Gibson dropped Gamburyan with a hook and it seemed like it was only a matter of time before Gibson finished him off. Gamburyan fought off defeat and stuffed a takedown from Gibson. Gibson walked into a guillotine and Gamburyan pulled guard. With fifteen seconds left, he cranked as hard as he could but it seemed like the hold was too high and Gibson was going to escape. Gibson postured up, hoping Gamburyan would simply slip off, and proceeded to tap out!

Manvel Gamburyan def. Cody Gibson by way of Submission (Guillotine) 4:56 of Round 2