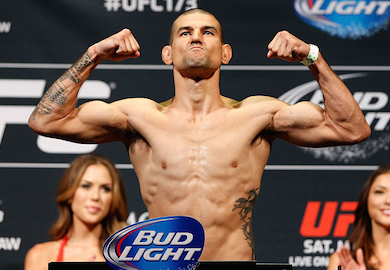 Anthony Njokuani and Vinc Pichel headlined the UFC Fight Pass preliminaries, but the fight almost ended seconds into the first round.

Vinc Pichel tried to set a good distance between him and Anthony Njokuani by extending his hand and fingers, but he accidentally poked him in the eye. Njokuani walked back to a neutral corner and the referee brought in the referee, which is never a good sign when it comes to eye pokes. Joe Rogan and Mike Goldberg were confident the fight was going to end but the doctor said he could continue, and we were underway! Well, kind of.

The bout came to a pause a couple minutes later when Pichel slammed his knee onto Njokuani’s junk. Luckily it was toward the top of the cup so Njokuani only needed a minute to recover. The fight resumed and it was a tough one to judge with all of the pauses, but Pichel landed more strikes and he likely got the points for the first.

The second round was similar in the sense that Pichel dominated. Pichel slammed Njokuani multiple times and even threatened to stop the fight with a few unanswered shots to the head. Njokuani had given up his back at one point and almost walked into a rear naked choke, but he spun around and escaped safely.

Vinc Pichel finally started to show some inferiority in the third round, but not in a way that Njokuani would want. Pichel’s hands were hanging low and his mouth open but he was still able to execute three takedowns in the third. While on the ground, Njokuani allowed Pichel to transition at will but Pichel could not take advantage of the great positioning he had.

When all was said and done, Vinc Pichel had landed nine total takedowns.