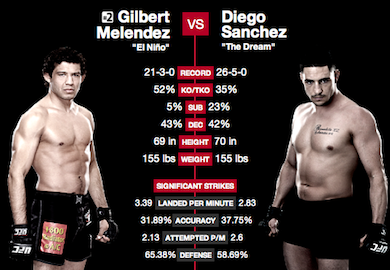 Joe Rogan ended the fight by saying “This was the best fight I’ve seen in my entire life,”. As a man who has seen over 1,000 fights, that’s quite a statement.

In what was easily a Fight of the Year Candidate, both Diego Sanchez and Gilbert Melendez showed that they are two of the toughest men in the UFC, let alone the lightweight division.

Diego Sanchez almost locked up the victory early on in the first round when he secured a back mount and got in position for a rear naked choke. Melendez defended intelligently, however, as he stood up and scooted Sanchez off his body. From there, Melendez put on a great display of offense and defended takedowns. Sanchez suffered a cut over his eye that would soon go on to threaten a fight stoppage on two separate occasions.

Gilbert Melendez utilized his methodic striking in the second and displayed more good takedown defense, stuffing Sanchez multiple times. The one time Sanchez was able to take his opponent down, he got right back to his feet seconds after. Sanchez was clearly gassed and started to swing for the fences at the end of the round, which seemed to work for him. Melendez took the second round, but it was clear Sanchez was gaining momentum.

The third round may go down as one of the most exciting rounds in all of combat sports. We saw both Melendez and Sanchez is serious danger at separate times with Melendez almost being submitted twice. If it wasn’t for the blood, he wouldn’t have been able to escape. After a few more legendary exchanges, it went to decision. In the end, Melendez would walk out of the octagon with his hands raised.