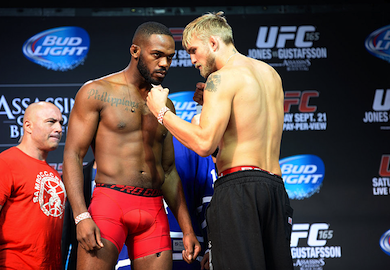 This fight was an instant classic and may be the best championship bout in light heavyweight history. Each fighter had their ups, and each had their downs. Gustafsson connected repeatedly with jabs and hooks while Jones’ bread and butter were his head kicks, leg kicks and elbow attacks.

The biggest surprise throughout the whole fight is that Gustafsson was able to stuff Jones’ takedowns attempts until the fifth round. It took Jones ten tries to finally get Gustafsson on his back, only to have him stand right back up seconds later. As a matter of fact, Jones got taken down early on in the fight.

Both fighters were busted open when all was said and done, but Jones was the only one walking out with a belt slung over his shoulder.