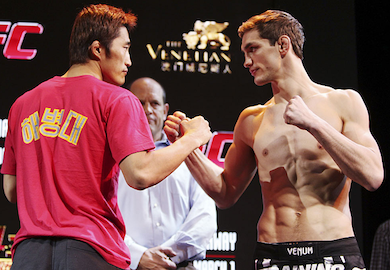 If you’re an early riser like us, or just need to catch up on today’s card, here’s your round-by-round updates:

Round 1 – Kim presses forward right away. Hathaway lands a big knee to the midsection, and another. Kim lands a right hook and Hathaway is hurt. He lands another left hand but Hathaway wraps him up in a clinch. Hathaway takes Kim down. Kim separates from the clinch with a spinning back fist but it misses. Kim nails Hathaway with a left hand. Hathaway goes back to the clinch. They separate and are back in the middle of the octagon. Hathaway lands a jumping knee to the gut of Kim. Kim catches Hathaway with a left hook. Kim seems to be gassing. Those three knees to the gut must have hurt him. Kim’s hands are low. Kim lands a left hook and Hathaway drops. Kim is standing over Hathaway and is blasting him with punches but Hathaway is awake and working to defend. Kim moves into Hathaway’s guard. Kim stands up and lands a stomp to the body. Kim is tired. Kim lets Hathaway stand up. Nothing lands and then the horn sounds. 10-9 Kim

Round 2 – Hathaway lands a knee to the skull of Kim. Kim lands an elbow. Hathaway follows him to the center of the octagon and connects with a big right hand!Hathaway looks for a takedown but Kim blocks it. They are getting really loose and wild now as they are both starting to show signs of fatigue. Kim CRACKS Hathaway with a left straight. Hathaway goes into the clinch and presses Kim up against the cage. They separate. Hathaway nails Kim with an uppercut. Kim lands a takedown and is in side control. Kim is landing short elbows and the time expires. 10-9 Kim

Round 3 – Hathaway lands a jumping knee to the head. Hathaway presses Kim uo against the cage and looks for a takedown but fails. They separate in the octagon and Kim NAILS Hathaway with a spinning back elbow. Oh my goodness. Hathaway is out cold. Game over.

Round 1 – Lipeng misses a wild right hook. Sai blocks a leg kick. Lipeng checks an inside leg kick. Inside leg kick lands for Sai. Big right hand lands for Lipeng. Nice left hook from Sai. Lipeng dips under a hook and goes right into side control. He takes the back of Sai. Lipeng has a body lock around the waist of Sai. Sai bucks and causes Lipeng to lose his body lock. Lipeng still has the back of Sai and sinks his hand under the neck of Sai! Lipeng is cranking. Sai peels Lipeng’s arm off his throat and turns the tables; Sai is now on top of Lipeng. Sai stands up and tries to dive in with a punch of his own which Lipeng almost counters with a triangle choke. Sai escaped with ease, though. The round ends with Sai on the back of Lipeng. 10-9 Lipeng

Round 2 – Lipeng looks for a double leg but could not finish and almost ends up on bottom of Sai. Lipeng got back up and Sai now has the back of Lipeng. Lipeng turns it around and presses Sai up against the fence. Sai turns it around and lands a glancing knee to the head of Lipeng who was technically downed. The referee pauses the fight and warns Sai. The fight resumes and Lipeng lands two consecutive takedowns. Sai gets up and Lipeng lands another slamming takedown. Lipeng has the back of Sai and Sai turns it around so that he is on top of Lipeng. Sai stands up over Lipeng and goes right into his closed guard. Lipeng looks to control the posture of Sai with rubber-guard. Sai lands a glancing blow on Lipeng and he is busted open. The horn sounds and the round is over. 10-9 Lipeng

Round 3 – Lipeng looks for a takedown and Sai stuffs it. Sai is now in the guard of Lipeng. Lipeng works for rubber guard multiple times, looking for a triangle but it never leads to anything. The referee stands them up and they reset the action in the middle of the cage. Lipeng lands a short right hand and shoots for a takedown but Sai stuffs it. He now has the back of Lipeng. They are both slippery with sweat so it is hard to keep any advantageous positioning. Lipeng turns it around and is in Sai’s guard, on top. A scramble leads to Sai standing over Lipeng, but Sai goes right back into Lipeng’s guard. The referee stands them back up with ten seconds left and they start going for broke. Nothing serious lands and the horn sounds, marking an end to the fight. 10-9 Sai

Matt Mitrione def. Shawn Jordan by way of KO (Punches) 4:59 of Round 1

Round 1 – Hioki gets his leg caught as he goes for the body kick but Menjivar catches it and tries to take Hioki down. Hioki manages to take Menjivar’s back. Menjivar stands up and wiggles his way free, they’re both back in the middle of the octagon. Menjivar presses Hioki against the fence, Hioki switches positions and Menjivar’s back is now pressed against the fence. Hioki lands a takedown with a minute and thirty seconds left in the round. He passes from half-guard to side control. Menjivar is giving up his back with thirty seconds left. Hioki loses position and Menjivar is starting to posture up. Hioki goes for a heel hook and the horn sounds. 10-9 Hioki

Round 2 – Menjivar opens up the round with a nice uppercut to the face of Hioki followed up by a body shot. Right hook lands for Menjivar. This is a much better round for him. The crowd is booing due to the lack of action. Menjivar lands an inside leg kick. Menjivar presses Hioki up against the fence. Hioki switches it around and lands another takedown. He landed right in side control. Hioki transitions to the back and is looking for an armlock. Menjivar panics and postures up, almost walks into a triangle. Menjivar escapes danger and he is now on top of Hioki. He lands a hammer-fist. Hioki makes it back to his feet and lands a third takedown. Menjivar is on bottom of Hioki who is in half guard. Hioki looks for an armlock but Menjivar bucks out of it and lands a knee to the body of Hioki. The horn sounds. 10-9 Hioki

Round 3 – Thirty seconds pass without a significant strike landed. Menjivar almost lands a nice right elbow. Push kick from Hioki. Menjivar knocks Hioki down with a huge right hand! Hioki is busted open on his right side, right under his hairline. THe blood is running into his eye— this could be an issue for him. They go in the clinch and Menjivar lands an elbow as they separate. Spinning backfist misses for Menjivar. Menjivar ducks under a jab and lands a body shot. Menjivar lands two push kicks. Hioki shoots for a double leg takedown and Hioki is now in half guard with thirty seconds left. Menjivar is working for a heel hook and time expires as he is cranking. 10-9 Menjivar

If you missed the preliminary card as well, check out the results HERE.