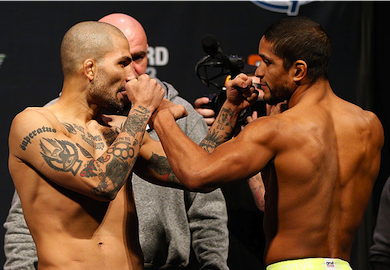 Round 1: Nobody is in the arena. This is sad. Sampo takes the middle of the octagon and opens up with a strong hook but misses. Benoit ends up on his back and Sampo is on top in Benoit’s half guard. He’s landing short elbows and it looks like they’re doing some damage. He transition to full mount but Benoit bucks out and is on top, now. Sampo has rubber guard and he’s looking for an omoplata but fails. Benoit has the back. He’s in an odd position and they’re at a stalemate. The referee stands them up. Sampo is beginning to establish the jab. Benoit misses with a wild hook but nails Sampo with a jab and a cross. Benoit misses another wild hook. Sampo hits him with a right cross. Sampo 10-9

Round 2: Benoit pops Sampo with a jab. Sampo gets Benoit with a combination, ending in a high kick. Sampo takes Benoit down and he has him in a crucifix-like position and he almost submitted Benoit with a kimura, then an armbar. He escapes, though. Sampo is in mount, Benoit bucked out of being on bottom by pushing off the cage. He has Sampo’s back! He’s looking for a rear naked choke, but Sampo scrambles out of it. Benoit is on top in full mount but Sampo gives up his back again. Sampo spins around again, Benoit was unprepared for it and Benoit is on bottom. Sampo is in Benoit’s half-guard. Sampo is working on Benoit’s body by punching it, and he is once again looking for a kimura. Benoit literally just slips his arm out of danger. Sampo is softening Benoit up with punches but they’re not doing any damage. Benoit tries to escape by turning out of it but Sampo catches him in a rear naked choke! It’s locked in and Benoit is done— he taps out.

Josh Sampo defeated Ryan Benoit by way of Submission (RNC) 4:31 of Round 2

Round 1: Spencer takes the middle of the octagon quickly. He’s working combinations to the body. As he’s rushing his shots in, he’s ducking low. Dober is looking to counter that with headkicks. They’re both moving fast. Spencer defends a takedown. Dober pops Spencer with a left straight. Spencer counters a head kick with a left straight. Dober doesn’t like it and shoots for a takedown again. Spencer hits Dober with two right hands and an uppercut. Dober catches Spencer wit ha knee after he ducks into it. They both throw about three or four strikes but whiff. Dober blocks a head kick. Spencer lands a right hand but the power faded toward the end. Dober eats a body shot in the form of a right straight from Spencer. Ineffective leg kick from Dober. Dober shoots again and it’s stuffed. Spencer lands an ineffective inside leg kick of his own. Spencer misses a short elbow. Body kick from Spencer. Horn sounds. 10-9 Spencer

Round 2: Spencer is pushing the action early on. Dober shoots for a takedown and gets stuffed once again. He needs to give up on this. Spencer nails Dober with a knee to the body. Dober eats a right cross. Big body shot from Spencer. Spencer NAILS Dober with a right elbow. Spencer clinches with Dober and pushes him against the cage. He’s working the body and knees of Dober with his knees. They’re back in the middle of the octagon. Dober is slowing down. Dober lands an inside leg kick. Dober shoots for a takedown in the middle of the octagon and Spencer bounces his defense all the way over to the cage… it’s another defended takedown. Surprise, surprise. The referee separates them off of the cage and they’re back in the middle of the octagon. Spencer goes low with his left but catches Dober with a right hook. Dober presses Spencer against the cage but Spencer easily pushes off. Dober lands a left uppercut. Dober nails a left uppercut and then a body shot. Dober eats a right hand. He’s exhausted. Inside leg kick from Dober. Horn sounds. 10-9 Spencer

Round 3: They take the middle of the octagon and they’re active to start off the round. Spencer lands a left and a right hook that Dober straight-up eats. Impressive. Dober goes for a takedown but Spencer throws him off. Spencer’s mouthpiece falls out and we have a temporary stoppage in action. We’re back underway. Uppercut from Spencer. Right cross from Spencer. Dober eats a left and a right straight. He’s eating a lot of shots. Dober fails another takedown. Right straight from Spencer. Body kick from Spencer. Spencer is way too fast for Dober. Dober fails another single leg takedown attempt. Spencer connects with a left hook and a right straight! Dober is messed up. He’s bleeding pretty badly from the nose. Dober eats two knees and he’s looking wobbly! Another knee from Spencer! Dober is ridiculous for not falling down. Short elbows from Spencer who is pressing Dober against the cage. Dober shoots for a takedown with ten seconds left and fails. Leg kick from Spencer. Horn sounds. 10-9 Spencer

Round 1: Harris takes the middle of the octagon and is choosing his strikes very carefully. Harris is quick to cut off Rosholt’s strike attempt with a hook. Harris looks for a headkick but it hits elbow. Harris lands a big right hand and Rosholt eats it with no problem. Harris backs Rosholt up with a barrage of strikes and then drops Rosholt twice in a row! The referee doesn’t end it and Rosholt is back up to his feet, not wobbling at all. Wow. Two straight shots dropped Rosholt in a row, and not a strike has been thrown since by either man. Rosholt and Harris trade leg kicks. Harris is picking his shots. Rosholt lands a kick to the body. Rosholt misses a left hook. Rosholt lands a right cross. Harris trips himself up after overthrowing a hook. Rosholt eats a straight left. 10-9 Harris.

Round 2: Rosholt is starting to land with his combinations. Rosholt and Harris trade leg kicks. Rosholt eats a right hook. They’re both throwing with bad intentions but nothing lands. Nice knee from Rosholt. Rosholt lands an uppercut to the body. Rosholt is really to string his strikes together. Harris is getting outstruck and he needs to turn this round around. Harris seems to be getting tired. He’s overextending on his hooks and almost keeps falling. Harris absorbs an inside leg kick. Harris almost eats a knee. Harris’ mouth is wide open. Harris hits a right hook to the body. Rosholt is taking charge and is starting to move forward, controlling the octagon. Rosholt eats a right hook. Rosholt connects with a right straight and Harris nails a left straight. Horn sounds. 10-9 Rosholt.

Round 3: We are a minute in and not one single significant strike has connected. The Boo-Crew is here. Rosholt lands a takedown and he’s on top in Harris’ half guard. Short elbows from Rosholt. Rosholt isn’t really trying to transition, though. He’s just throwing weak punches. Short elbow from Rosholt as Harris tries to posture up. Harris eats another hard elbow. Rosholt is still in Harris’ half guard. Nice left hand from Rosholt that bounces Harris’ head off the canvas. Rosholt is looking for an arm lock but Harris counters well and it’s successfully defended. Rosholt is staying active on top with twenty seconds left. Horn sounds, pretty dull round. 10-9 Rosholt

Round 1: The fans are booing Kim Winslow. She deserves it. Niinimaki Lands an inside leg kick. Yahya charges Niinimaki with a series of punches but they all miss. He does it again and Niinimaki dodges them all. Yahya takes Niinimaki down. Niinimaki is looking for a guillotine but Yahya is defending it well. Yahya looks to complete the takedown but Niinimaki reverses it and he’s now on top. Yahya has butterfly guard and he grabs a hold of Niinimaki’s left leg. Yahya may be looking to set up an inside leg hook. Niinimaki escapes. Yahya is looking to attack the foot again off his back but Niinimaki defends it well. Yahya has Niinimaki’s back! He has one hook locked in. Niinimaki escpaes a RNC attempt and they’re back standing. Niinimaki takes Yahya down. Niinimaki is in Yahya’s half guard. Yahya bridges and gives up his back by trying to scramble to a position of offense, but Niinimaki cuts him off. Niinimaki tries to escape half guard as the horn sounds. 10-9 Niinimaki

Round 2: Yahya lands an outside leg kick. Yahya lands a short uppercut while in the clinch. Yahya tries to sweep Niinimaki but he defends it well. Niinimaki turns the tables and presses Yahya’s back against the fence. Niinimaki lands a takedown. Yahya has an attempt for an arm-in-guilltoine and Niinimaki powers his way out of it! Niinimaki is now in side control on top. It’s amazing how Niinimaki is okay with grappling Yahya. Niinimaki lands multiple short elbows. Kim Winslow is threatening a standup due to inactivity. Yahya gets Niinimaki in his half guard, now. Niinimaki is looking to slip his leg out and transition to side control but Winslow stands them up. Niinimaki hits Yahya with a straight kick that sends Yahya bouncing off the cage. Niinimaki has Yahya pressed against the cage but Yahya wraps his legs around Niinimaki’s waist and tries to lock in a neck crank submission. It looks like a guillotine but since Yahya isn’t choking him, it’s a crank. The round ends with Niinimaki on top of Yahya looking to advance. Close round, but let’s give it to Niinimaki.

Round 3: They meet in the middle of the octagon and Niinimaki immediately puts Yahya on his back. Niinimaki is in side control. Yahya gets him back in half guard. Short right hand punch from Niinimaki. Niinimaki is looking to lock up Yahya’s arm but he’s in no position to execute a submission. Winslow stands them up. Nice combination from Niinimaki. Missed headkick from Niinimaki. Yahya stuffs a takedown and he’s looking to reverse the takedown attempt into a guillotine. He’s on top of Niinimaki in half guard and if he cranks, he can submit Niinimaki. Niinimaki escapes by slipping his chin underneath the hands of Yahya, forcing Yahya to give it up. Yahya is in position for a kimura but quickly bails. It’s Yahya’s round, but he needed to finish the fight to win it. Horn sounds and it’s the funniest sounding horn in the history of the UFC. It sounded like a toy sailboat. 10-9 Yahya

Round 1: Guns are blazing right at the open! Blanco bombs Corassani with a bunch of shots. Corassani is pressed against the cage, and Blanco takes him down Corassani pops back up and eats a suspect knee that was borderline illegal. The referee stops the fight and we’re looking at the replay. Corassani’s hand and knee was on the mat. It was definitely an illegal knee. Corassani seemed coherent right after the knee, but once the referee paused the fight Corassani looked to be embellishing it a bit. Regardless, he was bleeding profusely out of the nose.