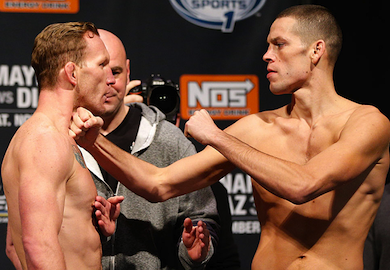 Round 1: It’s all girls in the octagon with Kim Winslow as the referee. Woo. Hoo. Morgan eats a left hook early. Duke lands a kick to the body. In the clinch, Morgan lands a knee and Duke hits an elbow. Duke hits a combo. Duke lands another body-head combo. Duke lands two knees in the clinch and her back is against the fence. She’s still landing knees even though her back is against the fence. She’s staying busy. Morgan’s back is against the cage now and Duke is working the body with punches. Duke tries to drag Morgan down, Morgan defends and Duke jumps on her looking to lock in an arm-in guillotine. Duke is really cranking. Morgan postures up and Duke tries to transition to a triangle choke. Duke is staying busy with punches to the skull of Morgan. Duke’s elbows are bouncing off of Morgan’s skull! Ouch. Horn sounds. 10-9 Duke

Round 2: Morgan is finding her range and she’s trying to come behind her jab. Duke lands a jab of her own, then an uppercut. Duke lands a right hook to the body. Duke lands a three punch combination that ends in a left hook. Morgan’s face is looking battered up. Left jab/right cross from Duke. Morgan eats another right cross. Morgan lands few nice strikes but Duke pushes her against the cage which drains all of Morgan’s momentum. Duke cuts off Morgan’s straight kick with a left hook. Duke secures the second round with a takedown. Horn sounds. 10-9 Duke.

Round 3: Duke is bouncing on her feet and very active while Morgan is flat on her feet. Morgan is trying to fight for a thai clinch but Duke makes it hers and slams her knees into the body and head of Morgan. Morgan’s back is against the fence and they’re tied up. Duke is looking for a takedown. Duke drags Morgan down in a bulldog-like move, which is odd because she just gave up her back. Morgan is in position to choke Duke out. Duke has Morgan in half-guard. Winslow stands them up as Morgan was looking to transition. Duke goes all out and nails Morgan with shots as the time expries. Morgan looks like an alien with all the knots on her head. Horn sounds and we have our FOTN as of now. 10-9 Duke

Round 2: Once again, these two guys are ready to put on a show. After some exchanges, Holdsworth ends up on top of Grant. After Grant tries to scoot to the cage wall, Holdsworth transitions to the back of Grant and he has the body triangle locked in! Holdsworth has a rear naked choke locked in and Grant submits! Fight over!

Round 1: Both of their stances are low. Rakoczy pops Pena with a jab. Pena rushes Rakoczy and takes her down. She’s in Rakoczy’s half guard. Pena is working on a guard pass and Rakoczy pushes her off which allows her to stand back up. Rakoczy is pressed against the fence. Rakoczy needs to look out for another takedown. She’s getting out grappled. They’re trading knees to the body. Pena takes her down again and this time it’s in the middle of the octagon. Rakoczy once again has Pena in half guard. Pena slams her forearm into Rakoczy’s head. Pena is throwing bombs on top of Rakoczy and transitions to side control. Pena is landing elbows and forearms. Pena is trying to set up an arm submission, but it was opossum as she transitions to mount. Pena is working the ground and pound, slamming hammerfists on Rakoczy. Pena is landing elbows and punches but Rakoczy is still trying to fight out of it. Rakoczy is just eating shots here and the fight needs to be stopped. She eats repeated punches and elbows until the fight is called off. Her face is messed up.

Round 1: No glove touch. Here we go, main event time! Maynard has the center of the octagon and Diaz pops him with a left cross. Maynard whiffs a hook. Maynard eats a jab. Maynard takes Diaz down with ease. Maynard drags Diaz to the fence. Diaz gets back up and executes a throw on Maynard! Beautiful. They’re back to their feet. Maynard has a cut over his left eye. Maynard lands a leg kick. Diaz lands a left hook. Diaz stumbles Maynard with a left! Maynard eats a left and another right! He’s lighting Maynard up! He’s out on his feet! The referee stops it. Maynard tries walking away but he collapses to the ground. WOW!