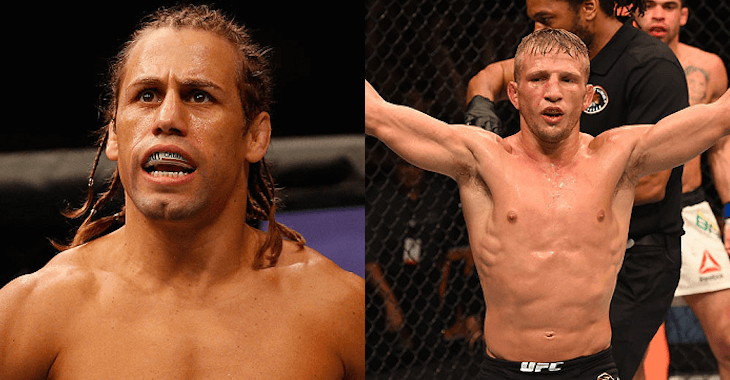 Just last week, UFC bantamweight champion T.J. Dillashaw informed his friends at Team Alpha Male that he would be switching camps for his upcoming title fight with Dominick Cruz, and will now train out of Denver’s new Elevation Fight Club.

Since that moment, a lot has changed.

First off, Urijah Faber took to the Stud Show Podcast where he dished some dirt on Dillashaw. “The California Kid” stated that T.J. had made a ‘big boy’ decision and would now have to deal with the fact that he is no longer allowed to train at the famed Sacramento gym.

Faber also seemed very comfortable with the idea of fighting his former teammate, this if UFC officials desired such a matchup.

Well, as of Monday, T.J. Dillashaw is also open to the idea of a fight with his former mentor and roommate (Faber). The current UFC bantamweight champion had this to say when asked if would accept a fight with Faber (via MMAFighting.com):

Dillashaw and Faber obviously know a lot about each other from being training partners for so many years. When asked if he thought he would defeat Faber, Dillashaw had the following one word response:

When he was asked if it would be weird to fight Faber, given his relationship with other guys in the gym, Dillashaw responded:

“There’s definitely a relationship with the guys, even with Urijah,” he said.  ”I don’t want to have to fight Urijah. It’s not something I want to do. I think of it from his corner. I’m the champion, I have the belt.”

Who wans to see a fight between former training partners Urijah Faber and T.J. Dillashaw? Sound off Penn Nation!