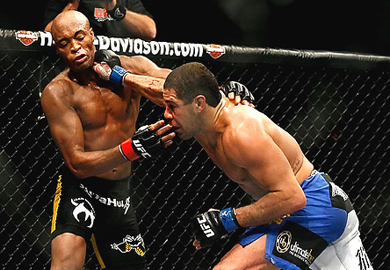 Ed Herman did not have to wait long to learn the name of his new UFC 167 opponent, as the promotion recently announced that former title challenger Thales Leites would be replacing Rafael Natal against “Short Fuse.”

Natal was promoted from his schedueld UFC 167 bout, to the headliner of “UFC Fight For The Troops 3” opposite Tim Kennedy, after Lyoto Machida had to be moved off that card to fill in at “UFC Fight Night 30” for the injured Michael Bisping.

The last few days have been like a game of musical chairs, at least for fighters in the UFC’s middleweight division, but that appears to finally be over with this latest news from “UFC Tonight.”

Ed “Short Fuse” Herman (21-9 MMA, 8-5 UFC) most recently fought at the UFC on FOX 8 event in Seattle, where he earned a hard fought split-decision victory over Trevor Smith. Prior to that, Herman was submitted Ronaldo “Jacare” Souza when he crossed-over to compete under the Strikeforce banner for the promotions final show in January.

Meanwhile, former middleweight title challenger, Thales Leites (21-4 MMA, 6-3 UFC), recently returned to the octagon after a four-year absence to take on Tom Watson at UFC 163 in Brazil. Leites was able to earn a unanimous-decision victory in front of his countrymen that evening, stretching his win streak to 4 in a row in the process.

UFC 167 takes place November 16 live from the MGM Grand Garden Arena in Las Vegas. Herman vs. Leites will likely be a part of the FOX Sports 1-televised preliminary card or the Facebook-streamed early prelims.