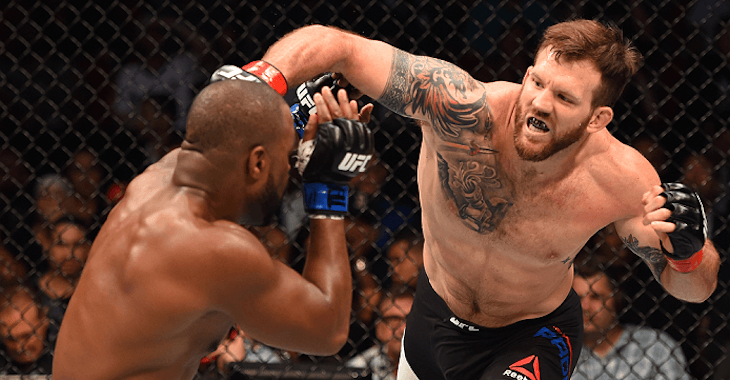 Title shots are never guaranteed and Ryan Bader knows this first hand. This is why Bader is not trying to wait around for a title shot against Daniel Cormier, as Jon Jones is likely the champion’s next fight in 2016.

Bader spoke on the MMA Hour and expressed his views on the landscape of the light heavyweight division and his next opponent (transcribed by MMA Fighting):

“They didn’t have to convince me. We said yes right away,” Bader said Monday on The MMA Hour. “For me, looking at it from my viewpoint, nothing is guaranteed. No title shots are ever guaranteed. I’m going to sit there and wait? Cormier is saying he doesn’t even want to think about it until next year and I have no clue when they’re going to fight, maybe in April, maybe later. And then what happens if the champ breaks his hand and gets hurt? Then I’m waiting even more. Then I’m waiting for what? May, potentially getting a shot? You never know. They could throw somebody in there, they could do Gustafsson-Jones 2. You never know what’s going to happen.

“I’m just kind of done thinking about it. It’ll happen when it happens, and all I can do is go out there and beat the next guy, and that’s it.”

That next guy Bader is referring to is the powerful and dangerous Anthony Johnson where Bader has been named the underdog. However, Bader has found success in the role as the underdog in his two fights in 2015, and looks to continue to prove the doubters wrong when the two meet at UFC on Fox 18 on Jan. 30 in Newark, N.J.

“My gameplan is to go in there and make [Johnson] quit,” Bader said. “Do what DC did to him. He’s been chatting on Twitter, trying to get me to respond to him back, and I wasn’t going to let him and his camp dictate what we’re going to do in our fight. He keeps saying how I have to beat a top-three guy or I haven’t beaten anybody to deserve or warrant a title shot, when these other guys are just getting thrown in off losses and stuff.

“It’s just a lack of respect. And I don’t care. I like that, because I get to go out there and prove people wrong. If I get to do that every single time, with my opponent, the fans and whatnot, then that’s what I’m going to do. I like being in that position. I’m a big underdog in this fight and I love being in that position. I love proving people wrong and proving myself right and my coaches.”

Who do you see winning this match between two of the division’s top contenders? Will Bader be able to upset the night as the underdog, or will Johnson prove the oddsmakers right? Let us know how you see this fight going down in the comment section below!