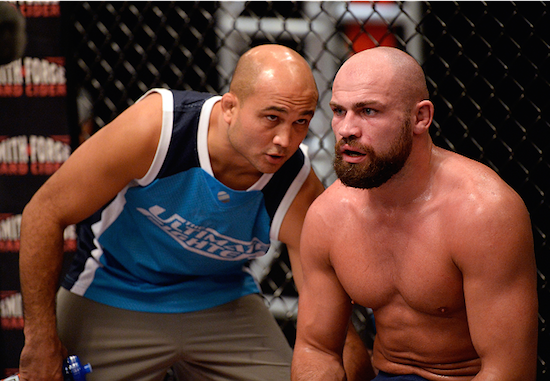 “Not to take anything away from rugby but I’d honestly think that rugby, when you look into it more, is the more dangerous sport. You’ve got these guys, who are massive men, running full tilt and hitting each other with forceful momentum that is very intense.

“The other thing is, if you’re a guy with a ball on the pitch and you’re running down the line, it’s not just one person that you’re looking out for. You can be getting tackled from either side.

“In mixed martial arts, you’ve got one guy and the aim of the game is to protect yourself. The referee tells you beforehand ‘Protect yourself at all times and if you cease to protect yourself, I’ll stop the bout’ whereas in rugby, I remember being told to ‘put your body on the line for the ball’.”

“Rugby was the first time I found my true competitive nature.

“When I played rugby, I wasn’t as concerned with getting my hands on the ball or making a run. What I loved was making a good tackle and hitting the rucks and really doing some damage trying to turn the ball over.

“It was the physicality of the rugby that really appealed to me so when I found mixed martial arts, it was like finding a more concentrated version of what I loved about rugby.

“I’m very happy and fortunate that I found mixed martial arts because I think it suits me better.”

“I attribute a lot of my success in MMA to my rugby career. Technically, I really took to the grappling and wrestling of the sport thanks to my rugby background.

“It wasn’t until I started mixed martial arts that I realized that rugby players really do have a great understanding of wrestling, which is basically getting someone down to the ground.

“That would be considered a weakness of the European mixed martial artists, compared to their American counterparts because obviously over in America, wrestling is a big part of high school and college.

“But in my case that hasn’t been a factor and I definitely attribute that to rugby.”

“I think any individual sport is a lot more mentally challenging, whether it be MMA or golf or tennis, you’re going out there on your own and everything is on you. You can go out to play a rugby game and not show up for the first five or ten minutes and it may not make a difference but in individual sports you need to be switched on from the start.”

During a recent chat with Down The Blind Side Podcast (via SportsJOE), TUF 19 veteran Cathal Pendred (pictured), expressed his belief that Rugby is more dangerous than MMA.