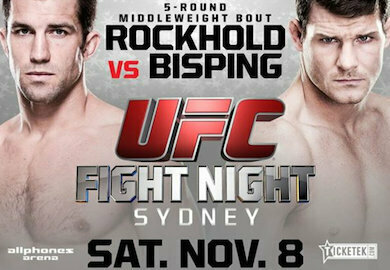 Michael Bisping and Luke Rockhold have been trading barbs, and will likely continue to do so until they square off in the cage of November 8th in Sydney Australia.

At the UFC Fight Night Sydney press conference, held to promote the event, Bisping and Rockhold took verbal shots at one another. Below is the transcript:

Luke Rockhold: He backed out of that (bet). He said it was…a bad example for your son, is that what I heard through the grapevine? When have you been a good example? Spitting on corners?

I’ve never been finished in one round in my life, and when I beat you, I don’t want you to have the excuse that, ‘oh, I was going all out in the first round so I could finish you because I wanted to win this bet.’ Obviously, if you look at me and you look at Luke you can clearly see that Luke needs the money. I dress in the fanciest clothes, Luke… You’re supposed to wear a suit here, it’s a press conference.

I get paid four or five times more than you. There’s a reason why that is. Perhaps I will donate you some money to buy you a suit when I kick your ass on Nov. 8.

Rockhold: No amount of training you do is going to save you from the beating you’re about to endure. I promise you.

Bisping: (Laughs) This isn’t the WWE.

Let me tell you a little story guys. Saturday night, I was working FOX calling the fights, and Luke’s friend Daniel Cormier is a regular on FOX and he’s talking to Luke, and says, ‘Bisping, you’ve got to hear this.’ So he puts it on loud speaker, and Luke’s screaming on the phone like some kind of possessed maniac going, ‘you don’t understand, Bisping, I’m going to walk through your pitter-patter punches, you’re in a world of pain, you’re in trouble.’ And I’m just laughing my head off. He’s absolutely hilarious. I’ve had over 30 professional fights, if you think it intimidates me, if you think scares me, then you are so mistaken my friend. I’ve fought many of you, many times. You’re going to be another victim. Just relax, and I’ll see you on Nov. 8.

Rockhold: I respect the confidence you have, but you have no idea what you’re in for. It’s funny. It’s hilarious.

But 50% of that duo, Cung Le, that ended with him having three broken ribs, a broken jaw, a broken nose. I don’t know if Cung Le’s checked out of the hospital yet? But if he has? Or when he does? Maybe go and see him, and talk about those pitter-patter punches.

You can watch the full press conference, which includes Rockhold and Bisping having their first staredown, HERE.