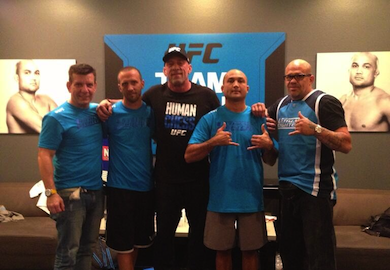 While we are still in the midst of the 18th season of the UFC’s ‘The Ultimate Fighter’ reality series, the 19th installment is underway with BJ Penn and Frankie Edgar set as coaching opposites.

Today, on the TUF set, BJ Penn sent out this image of his selected coaching staff for his second sting as TUF coach.

In the image you see what is likely the best assembly of coaches in the franchises history.