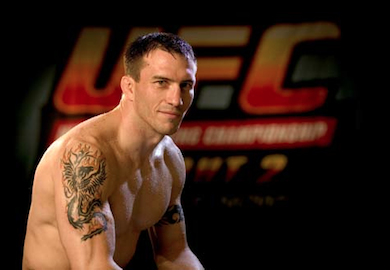 Nate Quarry is back, and this time he has suggestions for the UFC. Quarry recently when on the internet to spill the beans on the good and the bad that happens when your a UFC fighter. Now he has posted again, this time providing six suggestions that would improve how the UFC treats its fighters.

“Fight Week: Fighters are given two flights, one hotel room and $50 per diem
I suggest: Give the fighter 3 flights and $100 per diem. The days of one cornerman are over. Fighters are taking money out of their purses to pay for the numerous coaches they have to fly in to deliver the best fight possible.
Hotel Gyms: Fighters are allowed to use the gym for free, their corner has to pay to use the hotel gym where the fighter is actually fighting.
I suggest: The fighter and up to 3 cornermen get to use the hotel gym for free. This would cost next to nothing and is one little thing that shows the fighter that they aren’t being nickeled and dimed.
Sponsorships: This is completely random. The last time I was dealing with the UFC, clothing and supplement sponsors had to pay $100k for the privilege of having a fighter put their logo on the fighter’s shorts. Random companies don’t have to pay a fee.
I suggest: Remove the sponsorship tax. This is going to bring back a myriad of sponsors that want to support the fighters and can’t afford to pay 100k to the UFC.
UFC uniform: This is speculative but it seems that the UFC is moving towards a uniform for fighters to wear out to fight in. This is going to kill the remaining sponsors. No longer will they have a shirt sponsor if everyone is wearing the same shirt. No more shorts sponsors if everyone is wearing the same pair of shorts.
I suggest: Kill this idea. If the UFC is unhappy with certain fighters wearing inappropriate shorts or shirts, punish THEM. Not every fighter in the UFC.
UFC fight contract: I may be wrong but I believe the minimum wage in the UFC is $6,000. It goes up from there. I’ve had agents tell me they are pushing for a 5 fight contract. Why? If you’re fighter goes on a win streak he can’t demand more money. If he loses, he gets cut.
I suggest: A three fight NO cut contract. This lets the fighter know that for one year they are UFC fighters. They can focus on fighting and that’s it. The UFC is going to be more selective knowing that the guy they sign will be around for a year. This gives the fighter time to get over the Octagon jitters. And build a fan base because the fans know this guy will be around for at least a year. Right now guys come and go. So what difference does it make if you have one guy signed for three fights instead of three guys that are one and done?
Pay scale: Again, I could be wrong, but I believe the UFC minimum is 6k.
I suggest: Starting salary $10,000 to show, $5,000 win bonus. If you win, your next fight is $10/7.5. The third fight on your contract would be $10/10. For one year the fighter knows that they will be making a minimum of 30k.”